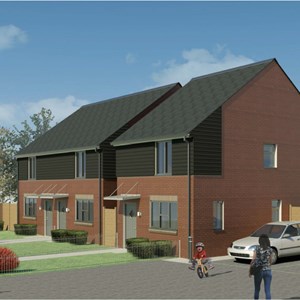 PLANNING permission has been granted for the first council homes to be built by a new city council-owned housing company.

Housing Leicester Ltd is set to begin work on creating 29 new homes across six sites in the city in the first phase of a major new affordable house-building project.

The city council’s newly created housing company has been set up to provide new housing at sites across the city over the next few years. In all, more than 300 new council homes are planned.

Planning permission has been granted for three of the initial sites – Ambassador Road in Crown Hills, Brocklesby Way in Netherhall, and nearby Maplin Road.

Ambassador Road is the first site where work is due to get underway on two semi-detached homes and one detached house. Work is due to begin there this summer.

At Brocklesby Way, one detached house is planned, along with one wheelchair-accessible bungalow, while two new bungalows are planned for the Maplin Road site.

Three more schemes are also awaiting planning decisions, including proposals for five detached bungalows at Rosshill Crescent, Thurnby Lodge, one of which will be designed to be accessible by people with disabilities, 12 new homes in six semi-detached pairs at Felstead Road in Beaumont Leys, while in Selby Avenue, Humberstone, five new homes including two pairs of semi-detached houses and one detached house are planned.

A contractor for all six of the first phase sites is due to be announced in the coming weeks. Houses built in this phase should be completed by April 2020.

Work is also taking place this spring on identifying sites for a planned second phase of building, which will bring the total investment to about £48million and create 320 new homes.

Leicester City Mayor Peter Soulsby said: “These will be the first homes created by the new city council-owned Housing Leicester Ltd, and represent a fantastic opportunity to commit to investing in these areas of the city, creating new council housing and regenerating disused areas of land to give them a new lease of life.

“I very much look forward to work getting underway at these sites, in the first phase of a major step forward in being able to provide our own council-built homes for Leicester.”

Assistant city mayor for housing, Cllr Andy Connelly, added: “This programme of house building will have a positive impact on the city’s council housing stock, and will help provide some of the additional housing which is badly needed in the city.”