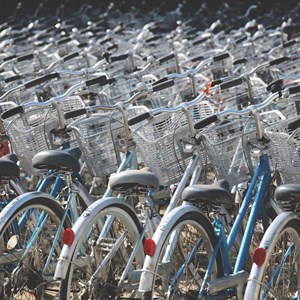 LEICESTER has been awarded nearly £8m of Department for Transport funding for a range of city transport schemes.

The bid – part of the council’s Transforming Cities work – has secured investment for two major projects, focusing on creating an extensive cycling network and bike hire scheme and bringing in a fleet of electric buses on one of the city’s three Park and Ride routes.

Around £6.25million will fund the development of a network of high-quality walking and cycling links, which will connect the city centre to the universities, neighbourhoods and other key areas of the city.

Some £500,000 of that will be used to create a new public bike hire scheme, with around 500 bikes available for hire from more than 50 docking stations across the city.

It is hoped the bike hire scheme will be up and running in late 2019.

A further £1.6million has been agreed to electrify the Park and Ride service running between Birstall and the city centre, along with the associated infrastructure allowing the electric vehicles to be charged over night at the Birstall Park and Ride site. The service is run jointly with Leicestershire County Council.

The service is designed to cut congestion on the busy A6 corridor, working with the bus company to replace existing diesel vehicles with new electric buses to help cut air pollution in the city.

Both schemes are designed to support the local economy and help improve air quality in the city.

Leicester’s £7.84million grant is the result of the city council’s successful bid for a share of £60million of Department for Transport funding for schemes to be delivered in 2019/20.

In addition to nearly £8million of DfT funding, the city council and partners will also contribute funding for the schemes.

City Mayor Peter Soulsby said: “Today’s announcement is fantastic news and allows us to move ahead with these two very significant and ambitious sustainable transport schemes, which offer real, clean alternatives to car travel in the city as well as improved transport links.

“The prospect of a bike hire scheme is a very interesting one, which could make a real difference to the way people travel within the city and between sites like the universities, Leicester Royal Infirmary and the new employment developments around the National Space Centre.

“Electrifying the Park and Ride services, starting with the route from Birstall, is a huge step forward in using clean and efficient technology in public transport.”

Currently about 17,000 daily cycle trips are made into and out of the city. As part of the successful DfT bid, work will now take place to develop better cycling and walking routes both to the north and south of the city centre, as well as more secure cycle parking at St Margaret’s bus station and in the city centre.

Cllr Adam Clarke, deputy city mayor for environment and public health, said: “Our bids, which the DfT has agreed to fund, are key to making sustainable transport in the city more accessible and more attractive to people.

“We are committed to improving air quality, cutting carbon emissions and further developing sustainable travel in the city, and we can now move forward with these ambitious schemes.”

Blake Pain, Leicestershire County Council cabinet member for environment and transport, added: “This is excellent news. We welcome the funding announcement and it underlines our joint commitment, along with the city council, to develop schemes which promote walking and cycling as well as contributing to a cleaner environment across the city and county.”