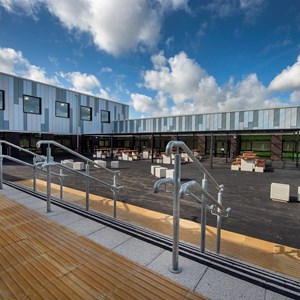 FINAL touches are being made to a £15.8 million expansion of a city secondary school, in time for pupils to start using the new facilities next term.

Work on the new campus began in January 2018 and has included the refurbishment and extension of the existing building, as well as the building of a new teaching block to the rear of the site.

From August 2019, the new teaching block will act as a base for the school’s year seven and eight pupils, with just year seven using it next academic year. The expansion will allow the school to continue to increase its capacity from 900 to 1,500 pupils.

Outdoor areas have been landscaped, with car parking and new play areas, and a new courtyard with outdoor dining facilities has been created.

The flat roof of the new classroom block has been fitted with 274 photovoltaic panels. The clean energy produced will help the school cut its CO2 emissions by the equivalent of 33,000 kg per year. The new panels will also help the school significantly reduce its energy bills and the £130,000 system is expected to have paid for itself in about eight to ten years.

Steve Piggot, Principal of Fullhurst Community College, said: “Our aim as a school is to provide the highest quality education for every student, helping them to thrive in a supportive and inspiring environment. The learning environment is a vital part of that.

“This new state of the art teaching block will bring huge benefits for students and staff. It will allow us to welcome more new students to our school and help us continue to raise standards.”

“With over £90milllion earmarked for new school buildings, this is the single biggest area of capital investment that the council is making.

The new learning block at Fullhurst is an example of what can be achieved. It has created a first rate new facility for pupils at the school and helped make excellent use of a building that was previously standing empty.

“The project team has done an excellent job and should be congratulated.”

Cllr Sarah Russell, deputy city mayor and lead on children and young people’s services, said: “Fullhurst is a popular and successful school that continues to go from strength to strength. This has been reflected in the number of families that now apply for places there.

“This new expansion will mean that the school can accommodate more of those pupils in coming years and will play a really important role in helping us achieve our ambitious expansion targets over the next five years.”

The multi-million pound project is part of Leicester City Council’s ambitious plans to invest up to £90 million in a major programme of school expansion.

This will provide more than 3,000 new pupil places across all secondary school year groups over the next five years, with an additional 600 year seven places by 2019/20.

The work is partly funded by the city council’s Basic Need allocation from the Department for Education, which is intended to ensure that there are enough school places to meet demand.