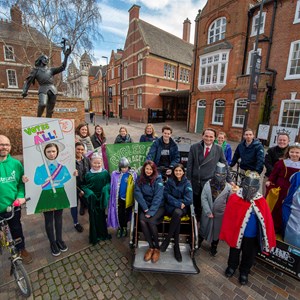 A SERIES of free events celebrating some of Leicester’s most attractive and historic streets will be launched next month (Apr).

Greyfriars Open Streets will see some of the roads in the city’s historic Old Town area closed to traffic on the last Sunday of each month so that they can be opened up for people to enjoy. Businesses will be encouraged to move out onto the streets during the events, with games like giant Jenga set up for people to enjoy.

The initiative has been organised by the city council’s Townscape Heritage Initiative and Ride Leicester teams, with funding and volunteer support from Sustrans, British Cycling, Living Streets, Leicester Cathedral and the King Richard III Visitor Centre.

The first event kicks off at 1pm on Sunday 28 April. Activities will include heritage tours by bike and on foot, starting from the city’s new Market Square and taking in the Greyfriars area.

This part of Leicester is full of important heritage and architectural treasures built up over more than 2,000 years. The area came to worldwide attention after the discovery of the remains of King Richard III in the car park at Greyfriars.

The area is home to the Cathedral and medieval Guildhall, but also to the less well-known Georgian heart of Leicester, which is well preserved and demonstrates how the city was laid out and developed in the latter part of the 18th century.

There is also a number of Victorian buildings, including former textiles factories and the city’s last surviving Turkish baths. They give a snapshot of the city’s economic changes and social history.

The area has recently benefitted from more than £10m of street scene improvements funded by the city council, property owners and the National Lottery Heritage Fund-backed Greyfriars Townscape Heritage Initiative.

Improvements have included repairs and restoration work to 19 buildings, bringing vacant space back into retail and residential use, and restoring five streets with high-quality materials. Historic granite kerbstones have been preserved, pavements have been widened, 10 trees have been planted and new cast-iron pavement lights have been installed.

Each monthly Greyfriars Open Streets event will be themed, with the April event celebrating the history of Leicester’s Suffragette movement. It will include a talk by Alice’s Hawkins’s grandson, Peter Barratt; displays and exhibitions by young people and the chance to try a game of bike polo – and all activities are free!

At Market Square, there will be an information stall, banner-making with Leicester Print Works, street food, a free bike-fixing service and free rickshaw rides.

Deputy city mayor Cllr Adam Clarke, who leads on public health and the environment, said: “The street scene improvements we have made to the Greyfriars area enhance the built heritage of our Old Town and help to highlight some of the beautiful buildings we have in Leicester. They also make these streets much more people-friendly, prioritising pedestrians and cyclists over cars.

“Greyfriars Open Streets will allow us to emphasise these improvements by inviting people in to use them, traffic-free, as places to meet, socialise and enjoy spending their leisure time.

“These events will bring our streets to life and showcase the city centre as welcoming and accessible for all.”

More information is available on the Facebook page at www.facebook.com/LeicesterOpenStreets , or visit the Choose How You Move website at www.choosehowyoumove.co.uk