Leicester to be transformed into a giant game this spring 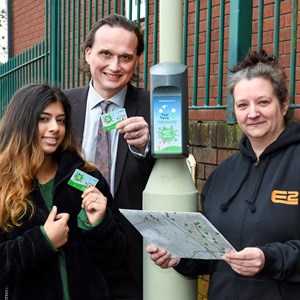 PARTS of Leicester will be transformed into a giant game this spring, as thousands of residents compete to see if their school, community or business can walk, run or cycle further than its rivals.

Running from 13 March to 24 April, Beat the Street is a free, fun challenge where people are rewarded with points and prizes for exploring their neighbourhood on foot or by bicycle.

Sixty special sensors called ‘Beat Boxes’ will soon appear across central and north-west Leicester, stretching from Leicester city centre to Belgrave, Dane Hills and Beaumont Leys. Those taking part in the six-week challenge will tap the Beat Boxes with special cards and fobs to track their journey – and the more Beat Boxes they swipe, the more points they’ll earn for their team.

Schools and community groups across Leicester will be competing against each other to see who can travel the furthest and climb the leaderboards – with hundreds of pounds worth of sport and fitness equipment up for grabs for the winners. Families are encouraged to play for their local school, while the wider community can create their own teams by emailing team.leicester@beatthestreet.me

If players have no team to support, they can help support a local charity when registering – players can support The Laura Centre, which provides bereavement support for parents, Baby Basics, which support new mums, and Prostaid, which cares for local people living with prostate cancer.

At the end of the game, the charity whose supporters have scored the most points will receive £500.

In addition to the leaderboard prizes, registered players can also win weekly ‘Lucky Tap’ prizes for playing along – including sports and fitness vouchers and experience days.

Dr William Bird, CEO Intelligent Health said: “We are incredibly excited to be bringing Beat the Street to Leicester and can’t wait to see how far everyone is able to walk, run, cycle and scoot during the challenge.

“Anyone living, working or studying in the area is able to get involved in Beat the Street – it’s completely free to play and is a great opportunity to go outdoors, spend time with your friends and family and get moving. Watch out for Beat Boxes popping up in Leicester soon, pick up a card and get involved.”

Councillor Adam Clarke, deputy city mayor with responsibility for the environment, public health and health integration said: “Around a third of children in Leicester do less than 30 minutes of physical activity each day, which is why it’s so important that we find new ways to make exercise fun.

“By bringing Beat the Street to Leicester, we hope we can encourage thousands of people of all ages to incorporate more walking, cycling and physical activity into their daily lives.”

Beat the Street Leicester is delivered by Intelligent Health and supported by Leicester City Council. It’s one of 59 Beat the Street games that will be set up across the South West and East Midlands using a new £3.3 million National Lottery funding grant from Sport England.

More than 900,000 people have played Beat the Street to date with previous games taking place in London, Dublin and Belfast.

More information about Beat the Street is available at beatthestreet.me/leicester