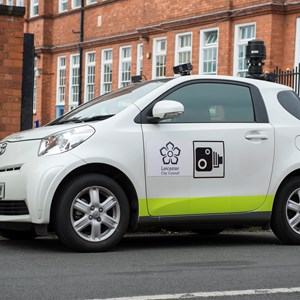 ANYONE stopping or parking on ‘keep clear’ markings outside more than 20 schools in Leicester could now be captured on camera and fined.

A new Traffic Regulation Order (TRO) allows the city council to use evidence captured by a camera car to enforce the restrictions – which will make it much easier to issue a penalty charge notice (PCN) to anyone found flouting the regulations and putting children’s safety at risk.

By using a camera car with automatic number plate recognition (ANPR) technology, the council will quickly get the evidence it needs to fine anyone who stops on the yellow zigzag lines – with the £70 PCN being posted straight to the home of the vehicle’s registered keeper.

Assistant city mayor for neighbourhoods Cllr Kirk Master said: “This is just one of a range of measures we’re taking to keep children safe on their way to and from school.

“We’ve been upgrading the signs and refreshing the road markings outside more than 20 city schools so that we can use the camera car to enforce the ‘no stopping’ restrictions that are not always respected by drivers.

“Motorists who stop on the zigzag lines, but drive off when they see one of our enforcement officers, won’t get away with that when the camera car is in use - now that ANPR evidence can be used to enforce the restrictions.

“This new TRO covers the first batch of primary and secondary schools in Leicester where this issue is a real problem, but we’ll be rolling out the programme to cover more city schools over the next 12 months.”

The restrictions will be enforced from 8am until 5pm from Monday to Friday.

Civil enforcement officers working for the city council can already issue offenders with fixed penalty notices for stopping on ‘School Keep Clear’ markings, but as it can take officers several minutes to capture the evidence they need, offenders have been known to evade the fine by driving away before the ticket has been printed.

The camera car – leased from Nottingham City Council – will be able to patrol more schools, more effectively, and it will be sent out to city schools on a regular basis. It will make its first appearance next week (week commencing 3 June), as the schools re-open after the half-term break.

Using the camera car is one of a range of measures being taken by the city council to improve children’s safety outside schools.

A full assessment of the physical measures and behavioural changes required at all Leicester’s schools is being carried out as part of the council’s school run action plan – a three-year plan to improve safety outside schools that was launched in January 2017.

The action plan ­is producing a programme of works for every city school to address issues around road safety, speeding, congestion and parking.

Physical measures, including pencil-shaped bollards that prevent parking on pavements, combined with behavioural changes that reduce the number of cars in the area – such as encouraging children to walk or cycle to school – are helping to make a difference.

Work to tackle problems associated with the school run is part of the city council’s £2.2million Parking Improvement Action Plan.