City's new synthetic wickets ready for a summer of cricket 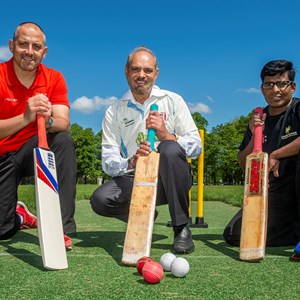 THE SUN is out, the football season’s over, and summer is on its way – which means it’s the perfect time to head for Leicester’s parks and open spaces for a game of cricket.

Six new synthetic wickets have been installed in parks across the city, providing a high-quality playing surface for both competitive matches and informal games.

Entirely funded by the England and Wales Cricket Board (ECB), the new synthetic pitches will help make cricket a year-round sport ­– and encourage people of all ages to pick up a bat and a ball and get active this summer.

Deputy city mayor Cllr Piara Singh Clair said: “With the ICC World Cup starting on 30 May, we’re expecting to see a surge of interest in cricket this summer, with people popping down to their local park to enjoy a game of cricket.

“These six new synthetic wickets are an important new addition to the range of facilities we offer in Leicester, and I’m very grateful to the ECB for funding these improvements.”

Suzanne Redfern MBE, club and facilities manager at the ECB, said: “We are delighted to have funded these additional cricket facilities at locations across Leicester.

“The ECB’s strategic plan, Inspiring Generations, is all about developing a new generation of fans and players who love the game of cricket.

“By having pitches in the heart of the city’s parks, we hope to make cricket much more accessible to communities across Leicester.”

The new synthetic wickets can be found in Victoria Park, Aylestone playing fields, Welford Road playing fields and Knighton Park – while two grass wickets in Evington Park have been replaced with new non-turf versions too. Together with the existing synthetic pitches in Humberstone Park, Rushey Fields recreation ground and Spinney Hill Park, the number of artificial wickets in city parks now totals nine.

The £66,000 wicket replacement programme is funded by the ECB and delivered in partnership with Leicester City Council and Leicestershire County Cricket Club (LCCC).

Throughout the summer, LCCC will be delivering free, casual cricket sessions on the synthetic wickets across the city as part of the ECB South Asian Core Cities Programme.

LCCC’s city development officer Dave Allen said: “Our casual cricket sessions will be taking place in a park near you throughout the summer.

“These sessions will be open to anyone aged 14 and over, regardless of ability – and they’re absolutely free.

“Get in touch with us to find out about cricket sessions in your area by contacting the LCCC community team.”

The new wickets can be used free of charge on a turn-up-and-play basis, but anyone organising matches, tournaments or league games from April to September can book the space by emailing sportonparks@leicester.gov.uk. A three-hour booking costs £15.

More information about outdoor sports in Leicester is available at leicester.gov.uk/activeleicester

LCCC’s community team can be contacted on 0116 244 2198 or by email: dave@leicestershireccc.co.uk