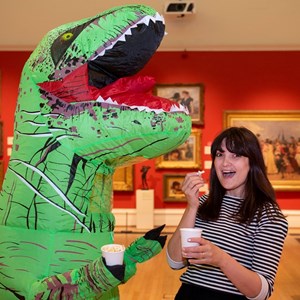 EARLY morning screenings of some of Britain’s most popular family films are set to become a regular feature at Leicester’s New Walk Museum.

On Saturday (18 May), the new Movies at the Museum series will kick off with Steven Spielberg’s blockbuster, Jurassic Park.

With doors opening at 9am, the early morning cinema could be just the thing for families with young children.

The film will be shown in the museum’s Victorian Art Gallery, where a small bar will serve popcorn and fruit juice.

After the film finishes – at 11am – there will be dinosaur-themed colouring and crafts in the museum’s dinosaur gallery.

Cllr Piara Singh Clair said: “Watching an early morning screening of a blockbuster movie at New Walk Museum could be the start of a great family day out.

“After you’ve enjoyed the film, there’s still the dinosaur gallery, the ancient Egyptians and the rest of the museum to explore.

“If people like the idea of a Saturday morning cinema club, we’ll aim to screen a different film every month, with a family-friendly movie planned for the third Saturday of every month.”

Tickets for Jurassic Park, which starts at 9.30am on Saturday, are £5 for adults and £2.50 for children. Parents with very young children will need to consider if the film, rated PG, is suitable for their child.

June’s Movie at the Museum is expected to be The Lego Movie 2, which will be screened on Saturday 15 June, subject to licensing permissions.

Jurassic Park will be screened at New Walk Museum thanks to a partnership between the museums service and filmtramp presents.