Worldwide graffiti artists Bring The Paint to city this month 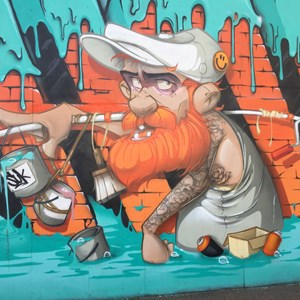 WORLD-renowned graffiti artists will be creating stunning murals and large-scale public artworks on some of Leicester’s buildings for the second Bring The Paint event.

The week-long international festival of street art, music and outdoor events will see artists from across the globe creating breath-taking graphic artworks on buildings in Leicester city centre and at Frog Island between May 20 and 26.

The festival, which took place for the first time in 2017, transformed some of the city’s public buildings with eye-catching, huge-scale artworks. They include both the front and rear courtyard of the LCB Depot and the exterior of The Soundhouse pub in Leicester’s Cultural Quarter.

Other stunning artworks appeared on buildings and walls throughout the city centre with the agreement of their owners.

In addition to being able to watch the painstakingly-detailed street art taking shape during the week, visitors will also be able to enjoy an art fair, exhibitions, live music, workshops, street food and a range of satellite events.

The festival is being run by city-based street art organisation Graffwerk, based in Frog Island, and supported by Leicester City Council.

Events will culminate on Bank Holiday weekend with a one-day art fair and sale on Saturday, May 25, in Queen Street in the city’s Cultural Quarter, and the family-friendly Sunday Social at Graffwerk’s base in The Mill, Frog Island, on May 26.

City Mayor Peter Soulsby said: “The first Bring the Paint event in 2017 brought a real creative buzz and vitality in the city and some breathtaking new landmarks to parts of the city centre.

“It is very exciting to work with Graffwerk once again on this event, which attracts world-class street artists from around the globe to the city.”

Full details of Bring the Paint 2019 are available at: https://www.bringthepaint.co.uk/ and at the group’s Facebook pages.