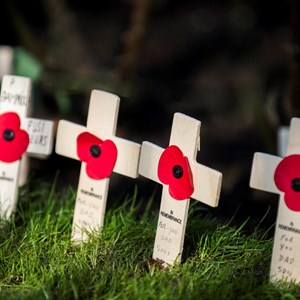 THOUSANDS of people across Leicester are expected to attend the city’s Remembrance Day events as the nation pays its respects to its fallen servicemen and women.

The city’s main Remembrance Day service takes place on Sunday (November 10) at the Arch of Remembrance in Victoria Park.

Members of the armed forces, veterans and cadets will step off from De Montfort Hall at 10.35am, with the parade making its way along Centenary Walk to the Arch of Remembrance shortly before the service starts at 10.55am.

Members of the public are requested to be in place by 10.30am, ready to show their support for those in the parade.

The Remembrance Day service will be led by the Bishop of Leicester, the Right Reverend Martyn Snow. Maroons will mark the start of the two-minute silence at 11am.

Official wreaths will be laid at the Arch of Remembrance by the Lord Lieutenant of Leicestershire Mike Kapur OBE and Councillor Annette Byrne, Lord Mayor of Leicester, along with representatives from local emergency services, military units and faith groups.

Members of the public will be able to lay their own wreaths at the end of the ceremony.

The nature of the event means roads in the immediate area – including Granville Road and Regent Road - will be closed from 9.30am on Sunday.

The car park at Granville Road will not be in use, but a very limited number of spaces will be available for blue badge holders. These must be booked in advance by emailing lord.mayor@leicester.gov.uk or by calling 0116 454 0020.

The Lord Mayor of Leicester Cllr Annette Byrne said: “Remembrance Day is always an opportunity to reflect on the sacrifice made by the men and women of our armed forces in defence of their country.

“I’m sure the people of Leicester will turn out in huge numbers on Sunday to join me in paying our respects to those who gave so much.”

Leicester Market will fall silent for its annual Remembrance commemorations on Monday 11 November.

The service – conducted by Reverend Karen Rooms from Leicester Cathedral - will begin at 10.50am in Corn Exchange square and will be attended by the Lord Mayor of Leicester. A bugler will sound the Last Post at 11am to signal the start of a two-minute silence.

After the service, those attending will be invited to place flowers on the war memorial in Town Hall Square.

As part of the city’s Remembrance events, the stories of some of Leicester’s fallen servicemen and women will be told in a new exhibition at Leicester’s Newarke Houses Museum.

In Memoriam showcases some of the war memorials that have been saved from destruction by the Leicester City, County & Rutland At Risk War Memorials Project.

The free exhibition opens on Saturday (9 November) and continues until 9 February 2020.

Visitors to Newarke Houses – which is home to the Museum of the Royal Leicestershire Regiment – will also see a poignant silhouette of a Tommy in the museum’s gardens.

The Tommy statues were created as part of the nationwide art installation, There But Not There, which was commissioned to mark the centenary of Armistice Day in 2018.

The Tommy silhouette will stand outside Newarke Houses Museum throughout November.

Four Tommies will also stand inside the Arch of Remembrance during Sunday’s service of remembrance.