Park & Ride every day in Leicester this December 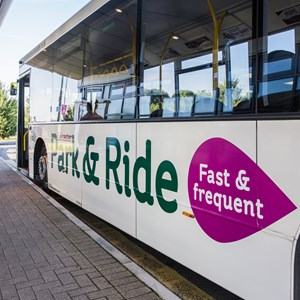 LEICESTER Park & Ride is running extra services throughout December – which means you can catch a Park & Ride bus into the city centre every day in December, apart from on Christmas Day.

The extra services will be running on all five Sundays in December. On those Sundays (December 1, 8, 15, 22 and 29), buses will run every 15 minutes between 10am and 5.30pm from the three sites at Meynell’s Gorse, Enderby and Birstall.

On top of the Sunday services, BID Leicester is funding extended Leicester Park & Ride services so that people can make the most of late-night Christmas shopping or enjoy a night out.

Extended services will be running until 9pm every Monday-Saturday from December 9 to December 23, and the buses will run every half hour from 7pm until 9pm. BID Leicester is also funding an additional service on Boxing Day (Thursday 26 December) from 10am to 5.30pm.

Cllr Adam Clarke, deputy city mayor for environment and transportation, said: “This year, we’ll be running a full park and ride service on all five Sundays in December.

“Thanks to some generous sponsorship from BID Leicester, we’re also able to run an extended service in the evenings, with the last buses leaving the city centre at 9pm on some of the most popular shopping nights in December – and there will be a special service on Boxing Day too, for anyone who wants to get out and about over the Christmas period.

“Using the park and ride service is a great way to help reduce the number of cars on our roads – but it’s also a very cost-effective way of getting to the city centre.”

Travelling from the park and ride sites to Leicester city centre costs just £4 return for up to five passengers.

Cllr Blake Pain, Leicestershire County Council cabinet member for passenger transport, said: “Leicester Park & Ride services are the perfect way to travel into the city centre to make the most of the festive season.

“I would encourage everyone planning trips into the city centre to leave their cars at one of our three Park & Ride sites and take the bus instead.”

There will be no Park & Ride services on Christmas Day and New Year’s Day and the normal timetable resumes on Thursday 2 January.

All three of the Park & Ride sites have free parking for customers, including disabled spaces and parent & child parking.

Free WiFi is available on all buses.

Tickets from christmasinleicester.co.uk, Visit Leicester on Gallowtree Gate and the Jubilee Square box office. £10/£8.50 (£9/£7.50 at off-peak times). Skate for a fiver on our preview days (5-6 December)

From 10am daily (11am on Mondays to Fridays until 20 December) until 5 January. Closed Christmas Day and New Year’s Day.

From 7 December: Santa in the Square. New Market Square

Visit Santa in his snow-covered grotto, every day until 22 December. Free admission – and free small gift for every child.

Strike a pose at LightWeight, a giant shimmering globe featuring live animation, every day until 21 December. Presented by BidLeicester.

Enjoy the finest festive food and drink at Leicester’s German-themed outside bar.

Open daily from 10am-9pm until 28 December

Book your tickets for Leicester’s real ice rink. Choose from a wide range of Leicester-themed gifts, including gorgeous hand-painted baubles and Christmas cards.