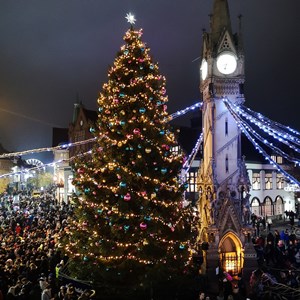 THE COUNTDOWN to Christmas got under way in Leicester last night with the switch-on of the city’s spectacular festive lights.

More than 20,000 people braved the cold to watch the city light up ­- and to enjoy a packed programme of entertainment organised by the city council.

A free outdoor screening of the Christmas classic Elf attracted hundreds of people to the new market square, while brass bands provided a festive backdrop in Town Hall Square, where visitors enjoyed the lights and a traditional nativity scene.

Costumed characters – including some dazzling stilt walkers ­­– mingled with shoppers, people wrapped up warm to enjoy a spin on Leicester’s Wheel of Light, and crowds on Humberstone Gate enjoyed music from 4th Avenue, Gareth John and The Platforms.

There was also a song from special guest Antony Costa, who will be appearing as Abanazar in De Montfort Hall’s Christmas pantomime, Aladdin, this year.

The singer from Blue got everyone singing along with the band’s hit, One Love.

At 6.30pm, as the Lord Mayor of Leicester Cllr Annette Byrne flicked the switch, 16,000 lamps lit up the city centre – including thousands of fairy lights on Leicester’s beautiful 50ft Christmas tree.

Leicester deputy city mayor Cllr Piara Singh Clair said: “The switch-on of Leicester’s Christmas lights is always a hugely popular event and signals the start of the festive season in the city.

“Our Christmas tree at the Clock Tower looks extra special this year, thanks to hundreds of colourful new baubles and thousands of new lights.

“Leicester’s Christmas lights help create a wonderful festive atmosphere that creates a perfect backdrop for some Christmas shopping or a family night out.”

The city council has spent an extra £50,000 this year replacing worn-out fixtures and fittings and updating the city’s stock of lights and decorations. The additional funding means there are brand new decorations for Silver Street, High Street and Cank Street this year. In total, around 20 city centre streets are lit up for Christmas.