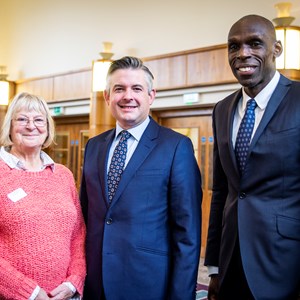 Hosted by the city council, the event was an opportunity for delegates to discuss whether alcohol addiction has become normalised in modern society – and to consider how that impacts on efforts to tackle excessive drinking.

Speaking ahead of the event, Mr Ashworth said: “Growing up as the child of an alcoholic father I am all too aware of the damage drinking can cause, not only to the individual concerned but to their family and the wider community.

“It is an honour to speak at the first reducing alcohol harm summit. I truly hope that this event, and others, will lead to an effective alcohol strategy that will benefit the whole of Leicester.”

Alcohol-related mortality is a significant issue in Leicester, with alcohol-related deaths for men higher than the national average.

For women, the alcohol-related mortality rate in Leicester is 28.8 per 100,000 – which is roughly in line with the average for England.

In addition, hospital admissions for alcohol-related conditions – particularly for men –have been increasing. In 2017-18, the alcohol-related admission rate for men in Leicester was 3,525 per 100,000 of the population. This compares with the national rate of 3,051 per 100,000.

“While many people in Leicester are teetotal because of their faith or for cultural reasons, there is a cohort of people in the city who are not dependent on alcohol but who are drinking more than the guidelines recommend on a regular basis and storing up problems for later life.

Today’s event - ‘Alcohol – a normalised addiction?’ covered topics including alcohol-related health harm in Leicester, the changing pattern of alcohol use in the UK, and practical examples of routes to behaviour change and recovery.

The event was the first in a series of conversations about alcohol. Future events are expected to cover themes such as minimum unit pricing and licensing. Ideas and information gathered from all the events will help shape a new alcohol strategy for Leicester.

The new strategy is expected to be launched in spring 2020.