Leicester gets set for a dazzling Diwali 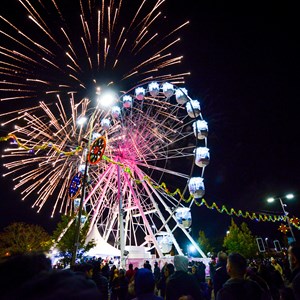 LEICESTER’S famous Diwali lights will be lighting up the city’s Golden Mile from Sunday October 13 this year, heralding the start of two weeks of festivities.

The Wheel of Light, Diwali Village and a spectacular aerial firework display will all make a welcome return to the switch-on event, which is expected to draw crowds of around 40,000 people from all over the UK and beyond.

Leicester’s deputy city mayor for culture, leisure and sport, Cllr Piara Singh Clair, said: “Our world-famous Diwali celebrations are a Leicester tradition, bringing together our diverse communities to celebrate the Festival of Light.

“As well as the Diwali Village, Wheel of Light and fireworks displays on both Diwali Day and for the lights switch-on, there will be lots of themed activities and events taking place throughout the city during the two weeks leading up to Diwali Day on October 27.

“We welcome everyone to join in and enjoy the magic of the Festival of Light at one of the largest Diwali celebrations outside of India.”

On October 13, the celebrations begin at 3pm with the opening of the Diwali village on Cossington Street Recreation Ground. Open until 9pm, the Diwali village will include a full stage programme showcasing local talent, as well as children’s funfair rides and food stalls. To give light and warmth to everyone who comes to the park, a three metre-tall, moon-shaped fire installation, called The Fireball, will burn brightly from twilight for the duration of the event.

The stage programme on Belgrave Road will begin at 5.30pm and will include a vibrant programme of music and dance presented by the Leicester Hindu Festival Council and Leicester City Council, supported by Curve theatre and compered by Leicester Hindu Festival Council and BBC Radio Leicester. Highlights include a colourful review of Curve’s recent community production of ‘Bollywood Jane’, inspired by the classic film Dilwale Dulhania Le Jayenge. There will also be a performance from award-winning musician Navin Kundra.

Leicester’s famous display of 6,000 Diwali lights will be switched on at 7.30pm, followed by a spectacular firework display, which can be viewed from Belgrave Road. The area will also host roaming street artists, including a giant puppet parade from 5.30-6.30pm.

And visitors will be able to pop in to the Belgrave Neighbourhood Centre from 4pm to see the annual Mela Rangoli exhibition, with its mixture of modern and traditional Rangoli styles.

Other events taking place as part of the festival include the Diwali Mela Bazaar on Humberstone Gate on Saturday October 19, which will offer arts and crafts, tantalising Indian cuisine and live entertainment. A pop-up shop in the Highcross, from 15-18 October, will offer Diwali-themed activities from Leicester’s arts, museums and festivals staff, while a family day at Curve on October 19 will include storytelling, mendhi hand decorating, Rangoli art and an exhibition of traditional Indian dance and costume.

Belgrave Road will be the focus once again for Leicester’s Diwali Day celebrations on Sunday October 27, when the Diwali village will return to Cossington Street Recreation Ground from 3pm, along with entertainment on stage from 6pm.

Fireworks will round off the celebrations, with an aerial display created and choreographed by local company Bright Spark Fireworks, producing layers of spectacular colour and sound, exploding hundreds of feet above the Belgrave Road.

The Wheel of Light, a 110-foot Ferris wheel which provides a glittering centrepiece to the festivities, will be on Belgrave Road from Friday October 11 to Sunday November 10.

A full programme of events is available at visitleicester.info