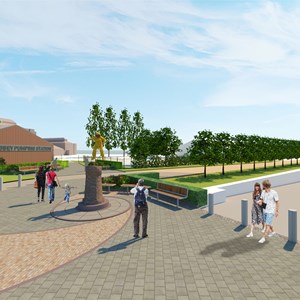 PROPOSALS for a scheme that would improve the links between the National Space Centre, Abbey Pumping Station and Leicester’s planned space and technology park have been drawn up by the city council.

Artist’s impressions submitted as part of the planning application show a high quality scheme that would create a new sense of arrival at two of Leicester’s most popular visitor attractions, while helping to improve connectivity across the wider Space Park Leicester development site at Ellis Meadows.

Under the proposals, the statue of the pioneer spaceman Ed White would be moved from its current location outside the space centre and become the centrepiece of the new public realm scheme.

Granite and porphyry paving would be laid in a spiral form around the statue, with seating and new landscaping completing the scheme.

A new, more inviting approach to the Abbey Pumping Station would also be created as part of the scheme, with new signage on the museum’s industrial buildings helping to give the popular attraction a more clearly defined entrance.

City Mayor Peter Soulsby said: “This scheme will improve the approach to two of Leicester’s most popular attractions, helping to set the scene for a quality experience for visitors and creating a new sense of arrival.

“Investment in the public realm is also part of the wider plans for the area, supporting the development of Space Park Leicester and helping to improve connectivity across the site.”

“This scheme will give visitors to these sites, as well as the wonderfully atmospheric Abbey Pumping Station, a calm, relaxing place to take a breath and absorb the compelling story of the pioneer spaceman before heading off for a great day at their chosen venue in this ever-evolving part of town.”

The £300,000 public realm scheme is part of the Space Park Leicester and Pioneer Park infrastructure project, part-funded by £5m from the Local Growth Fund allocated by the Leicester and Leicestershire Enterprise Partnership (LLEP).

Subject to planning permission, work on the scheme could get under way early next year and would take around three months to complete.