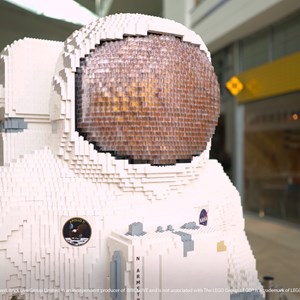 THE 50th anniversary of the historic Moon landing is being brought to life with an exciting series of space-themed activities taking place in Leicester city centre during the half term holidays.

The ‘One Giant Leap’ programme of events will see a packed timetable of free activities and attractions giving visitors of all ages the chance to relive the thrills of the 1969 Apollo 11 mission to the Moon – the culmination of the Space Race between the USA and USSR which enthralled audiences throughout the late 1950s and 1960s.

One Giant Leap runs from October 11 to 20 in locations across the city centre.

The BRICKLIVE® Outer Space Trail will see 15 amazing space-themed models containing LEGO® bricks touching down in venues around Leicester. Visitors can follow a digital trail around the city centre to  discover breathtaking reconstructions of the rockets which took humans to the Moon, and even stand side-by-side with models of the famous astronauts involved in the NASA missions.

People wanting to follow the trail should download the LoyalFree app and follow the BRICKLIVE® Outer Space Trail to find them all. Scanning a QR code at each location will give visitors the chance to win prizes – the more locations visited, the more prizes can be won.

For those wanting to enjoy the beauty of the Moon at a gentler pace, the serene Museum of the Moon exhibition will be at Leicester Cathedral from October 11 to 20, featuring artist Luke Jerram’s stunning installation of a huge, detailed, floating Moon. It will be accompanied by related special events including wine tastings and silent, moonlit discos.

Gamers will be able to take a step into the past with a series of retro, space-themed arcade games inspired by the Moon landings, which will be hosted on large-scale screens across the city centre from October 14 to 20. Participants can simply connect with their smartphones to join in the fun.

New Market Square will host a stunning outdoor spectacle bringing alive the sense of ambition, excitement and technical wizardry that went into the 1969 Apollo 11 Moon landing and enabled humans to set foot on another world for the first time.

Overview Effect, which takes place at the square on October 18 and 19, will transport audiences to the surface of the Moon, to share the view of the Apollo 11 astronauts Neil Armstrong and Buzz Aldrin, and appreciate their shift in understanding about the fragility of the planet we call home. Overview Effect promises a psychedelic and atmospheric outdoor projection, set to a stunning original soundtrack.

Leicester deputy city mayor for culture, leisure and sport, Cllr Piara Singh Clair said: “The Moon landings were such a dramatic event at the time – a real glimpse into the future and one of the greatest human endeavours in history.

“It is wonderful to celebrate these momentous events 50 years on, and bring to life the excitement of it all for audiences who were too young to remember.”

Simon Jenner, BID Leicester Director, added: “It is great for BID Leicester to be able to work with partners across the city to put on such an ambitious programme with something for everyone to enjoy.

“The variety and scale of the events will no doubt attract visitors to the city over the October half term holidays and encourage them to move around the city centre to discover these exciting installations, models, games and shows in different locations.”

The Space Race saw space flight pioneers from the superpowers of the Soviet Union and the USA competing against each other throughout the late 1950s and 1960s to develop the technology and vehicles capable of launching humans into orbit, and ultimately landing on the Moon.

The Soviet Union scored early successes, with the first satellite into space, the first animal in orbit, the first man and the first woman in space, but the USA’s Mercury and Gemini rocket programmes paved the way for the Apollo missions of the late 1960s, which succeeded in putting the first men on the Moon in July 1969.

It was followed by five more successful Moon landings as part of the Apollo programme between 1969 and 1972.

More details of the One Giant Leap programme are available at: