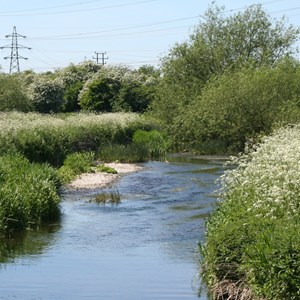 WORK is beginning on a £400,000 scheme to improve the habitat of Leicester’s largest nature reserve both for wildlife and visitors.

Leicester City Council is investing the money on a programme of landscaping and environmental improvement works in Aylestone Meadows aimed at improving the natural habitats, increasing its capacity for flood water storage and developing better public access and footpaths.

The work is being divided into two phases, the first of which is due to get underway next week and involves the creation of three new shallow ponds – known as scrapes – in an area of Aylestone Meadows known as Pebble Beach.

The scrapes will both create a new habitat for wildlife and improve the capacity of the area to absorb flood water from heavy rainfall, protecting nearby homes from rising water levels.

Earth dug out to make the scrapes will be used to create a series of habitat mounds on the banks of the River Biam, a tributary of the River Soar.

A second phase of works will focus on enhancements to the river channel itself and will include reinstating the river’s natural meanders to slow its flow, reducing flood risk and enhancing the ecological value of the river channel.

Silt and invasive willow and scrub plants will also be removed from the wet/marsh areas to help encourage wetland plants and associated amphibians and reptiles.

Detailed designs for the second phase are being drawn up with a view to begin works early 2020.

Leicester Deputy City Mayor for the environment, Cllr Adam Clarke, said: “This improvement programme is designed to conserve this nature reserve, provide additional capacity for flood alleviation and make it easier for visitors to access and enjoy.

“For many years people have paddled in and picnicked beside the River Biam at Pebble Beach and these wider plans for the meadows will create similar areas for future generations to do the same.

“The meadows naturally store rainwater and re-introducing some of the river’s natural features and meanders will help slow its flow, store more water and play a crucial role in protecting nearby properties from flooding.”

Aylestone Meadows is crossed by several watercourses and contains a mixture of grazing fields and swamp/marsh which form important areas for wildlife and biodiversity.

The site contains a network of public pathways and boardwalks which will also be upgraded to help improve access and connectivity across the site.

The Aylestone Meadows project forms part of the River Soar and Grand Union Canal Access and Environmental Improvement Programme. The project is supported by a £7.5m allocation from the Local Growth Fund, a pot of government funding awarded to the Leicester and Leicestershire Enterprise Partnership Limited (LLEP) for projects that benefit the local area and economy.”

Kevin Harris, chair of the Leicester and Leicestershire Enterprise Partnership (LLEP) added: “Aylestone Meadows is an important area of natural beauty right on the boundary where Leicester meets Leicestershire.

“The meadows bring security from flooding and enhanced quality of life for residents and remain hugely popular with visitors to the area.

“I’m pleased that the LLEP has made this investment to secure the future of these magnificent wetlands for generations to come.”

The work is a partnership programme between Leicester City Council, the Environment Agency and the Canal and River Trust to provide access and environmental improvements along the canal and river corridor between 2015 and 2021.

More details on the scheme is available here: https://bit.ly/2lsYIC6