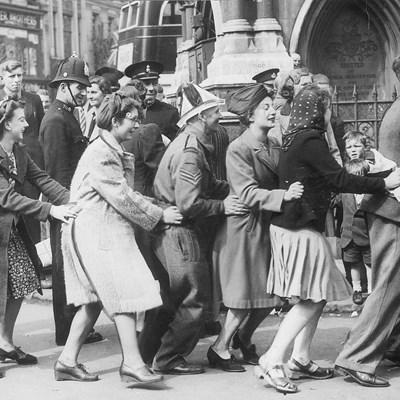 PEOPLE with photographs and memories of the day when Leicester celebrated the end of the Second World War are being asked to share them with the city council.

Images of street parties on housing estates, or impromptu dancing in the streets, will be used to help populate a special page to mark the 75th anniversary of VE Day on the council’s Story of Leicester website.

With public events to commemorate VE Day 75 now cancelled because of the coronavirus outbreak, the city council wants to use its digital platforms to ensure that the important anniversary is appropriately marked.

City Mayor Peter Soulsby said: “We’ve got some wonderful photos of the celebrations that took place in the city centre when people realised that the war was finally over, which we’re looking forward to sharing on our Story of Leicester website.

“But there must be many more images of VE Day in Leicester, carefully stored in photo albums around the city, that would be of interest to many people today.

“We’d love to see those photos – and we’d also love to hear people’s memories of the day. Our aim is to publish as much as we can on our website so that we can share these personal histories and help commemorate this very important anniversary.”

Those who remember VE Day will probably be in their 80s or 90s now, but family members are invited to jot down their memories and email them to the city council, together with their loved one’s name.

Treasured photos should not be put in the post, but instead they should be scanned in – or simply photographed with a mobile phone – and emailed to the council.

All contributions for the VE Day 75 webpage should be emailed to storyofleicester@leicester.gov.uk by Thursday 30 April.

The webpage is due to go live on Monday 4 May – just before the anniversary is marked on a special bank holiday on Friday 8 May.