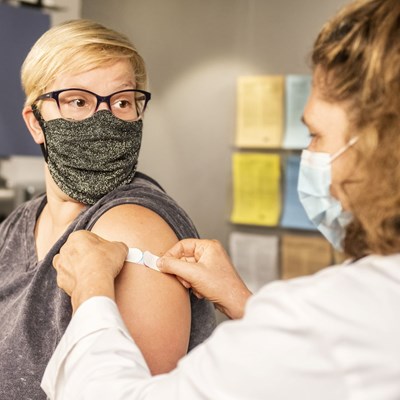 MORE than 150 people who tested positive for Covid-19 but who could not be located by the national Test & Trace programme were found within 48 hours by a team of contact tracers at Leicester City Council.

Since mid-July, the council’s new contact tracing team has been supporting the national scheme, helping to ensure that those infected with the virus are quickly identified and asked to self-isolate.

Set up by the council in response to the crisis, the team uses local knowledge, existing databases and the council’s own staff to locate these hard-to-reach people – and it’s a model that’s now being replicated in towns and cities around the country.

Chief operating officer Andy Keeling said: “By using staff from customer service roles and public health officers with a wealth of experience in tracking infection and disease, we’ve been getting excellent results in tracing the people that the national Test & Trace team were unable to find.

“Our existing databases mean the council already has extensive information to draw on, unlike a private sector organisation that would need to start its research from scratch.

“We’ve managed to trace around 90% of the people that the national system was unable to find since we launched this project on 17 July – and we hope our intervention has helped stop more than 150 people from passing the virus on to anyone else in Leicester.”

The city council is given the names of those who have tested positive for coronavirus when Public Health England has been unable to contact them within 48 hours. On average, the council receives six such referrals each day.

The Leicester team will use the next 24 hours to try to make contact by phone – and, if that doesn’t work, two members of staff dressed in full PPE will visit the address, or addresses, of those individuals.

Up to three home visits will be made in a bid to contact the individual concerned.

Whether they are contacted by phone or in person, all those traced by the city council are given the following information:

The local PHE health protection team works with the city council to provide expert advice, following up any issues related to workplaces or other settings where the virus might have spread.

Leicester’s success in locating hard-to-reach people has led the council to request that referrals are made to them more quickly – after 24 hours, instead of after two days have elapsed.

The council is awaiting a response from PHE to its request.

Andy Keeling said: “If we are to take these cases on sooner, after just 24 hours, we will need additional resources – and ideally that would be funding to recruit and train our own staff.

“But as yet we have no information from the government on what, if any, additional resources we will get.”

While the council’s knowledge of the city and its communities plays a key role in the process, a number of other factors are contributing to Leicester’s success in tracing local people.

Many people seem to respond more positively to a local person who’s not speaking to them from a standard script – and they welcome the fact that the city council is able to offer them support, should they need help with food or other essential items during their period of self-isolation. Even a simple thing, like receiving a call from a Leicester number, makes a difference. Many people are reluctant to accept calls from 0300 numbers, which are used by the national Test & Trace programme, but are also favoured by unsolicited cold callers.

A total of 175 cases have been referred to Leicester’s contact tracing team, since it was set up on 17 July.

Of those, 153 have successfully been traced, seven cases are currently in progress and just 15 people have not been found in the required timescale.

Our contact tracing team are given the details of people in Leicester who have tested positive for Covid-19, if PHE are unable to contact them within 48 hours. Using local databases and other information that's available to us, we attempt to contact them by phone over the next 24 hours. If this is unsuccessful, we will then visit the address/addresses we have for them and knock on their door. We'll make up to three visits to these addresses over a 24-hour period in a final attempt to contact them.

Our contact tracers are all city council employees (we don't use volunteers), and they all usually work in customer-facing roles. Currently there are 13 staff working on the phones/going through data, with a further eight who do the home visits in full PPE. The local PHE health protection team also works with us, providing expert advice and following up any issues related to workplaces or other venues where the virus might have spread.

When we do successfully trace someone (which we do in around 90% of cases), we take the following steps: we inform them that they have tested positive; we tell them to isolate for 10 days; we ask them to make sure that others in their household isolate for 14 days; we make them aware of our emergency food service and the help that's available to them while they're isolating; we ask them for details of the people that they've been in contact with.

Details of their contacts are then passed back to PHE for tracing.

The national Test & Trace service refers cases to Leicester City Council for a variety of reasons, including: