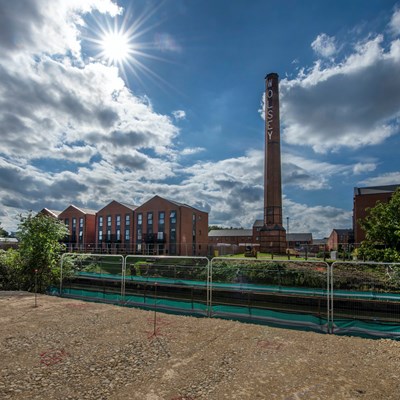 The bridge will link the new housing developments at the former Wolsey Factory site on Sock Island and the British United Shoe Machinery (BUSM) site on the opposite bank of the Grand Union Canal.

It will also provide a direct and attractive route for pedestrians and cyclists between Abbey Meadows and Belgrave and provide improved access to the canal towpath.

The new bridge will be named the Bennion Footbridge after businessman, philanthropist and owner of the BUSM empire Charles Bennion, who purchased Bradgate Park for the people of Leicestershire in 1928.

Work will be carried out on behalf of Leicester City Council by Countryside, the UK’s leading mixed-tenure developer. It is the final phase of the developer’s £25million regeneration of the former Wolsey Factory site into 188 new homes and apartments. The development comprises both private and affordable homes and was built in partnership with leading housing association Midland Heart.

A new path will link the bridge to the historic Wolsey water tower which was retained and converted as part of the new housing development.

City Mayor Peter Soulsby said: “Leicester boasts some beautiful riverside settings but it is only recently that we have begun to see new development that realises the enormous potential of these areas.

“The housing development at Wolsey Island is really something quite special and Countryside and Midland Heart are to be applauded for their ambitious vision to create a thriving new neighbourhood at this fantastic location.

“The new Bennion Footbridge will play an important part in this. It will provide a much-improved link for people who walk or cycle, encourage more exploration of the city’s beautiful waterways and provide a fitting nod to the history of this important location.

“I hope this inspires other landowners to see the potential for their own sites and helps to bring more of the city’s riverside back into use as new places to live and a work.”

Glyn Mabey, Managing Director, Partnerships East Midlands, Countryside, commented: “We pride ourselves not only on creating desirable new neighbourhoods but also our commitment to Placemaking by improving the areas in and around our new developments.

“The connectivity that the footbridge will bring will be a real benefit to all and help reignite the many positive attributes this city has to offer its residents. We are excited that this final part of the project is underway.”

Glenn Harris, Chief Executive of Midland Heart, added: “It’s been a pleasure working with Countryside and the city council to bring a number of much-needed new affordable homes to the heart of Leicester. This bridge will be the final chapter in the Wolsey Island story, providing a lasting physical link between the city and the thriving new community we’ve created on the island.”

Construction of the Bennion Footbridge will cost about £900,000 and will be funded entirely with Section 106 contributions linked to the housing development on Sock Island.

Work is expected to be complete by December 2020.