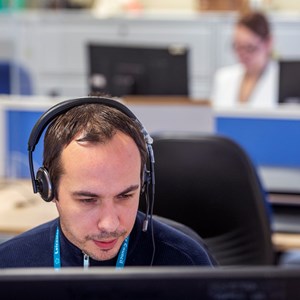 A PILOT study will get under way in Leicester this week that will give the city council responsibility for tracing people who test positive for coronavirus but who prove to be difficult to contact.

From today (Monday 7 December), the city council will be empowered to trace anyone in Leicester who tests positive for the virus, if they fail to respond to an automated message within eight hours.

Leicester City Council is the first local authority in the country to be given access to this data by Public Health England in what could be a significant breakthrough in the city’s bid to prevent the transmission of the virus.

Previously, cases would only be referred to the council after the national NHS Test & Trace service had spent up to four days trying to locate them – a time delay that increases the risk of the virus being passed on.

The pilot scheme is expected to demonstrate that the most effective way to trace hard-to-reach people who test positive – and stop them from spreading the virus – is to use local teams equipped with local knowledge.

City Mayor Peter Soulsby said: “Since we set up our contact tracing team in July, we’ve consistently tracked down around 88% of the people that the national Test & Trace service was unable to find – and that’s despite the number of cases rising.

“Of the 2,235 cases referred to us, we’ve been able to contact 1,976 people – and that means we’ve been able to ask them to self-isolate, make them aware of the support that’s available to them while they’re isolating, and try to gather important information about the people they’ve been in contact with, before and since their symptoms started.

“I’m confident that we will be able to demonstrate beyond any doubt that councils are best placed to deliver this important tracing service.

“We know our communities, we have a wealth of local data and we have staff who can talk to people in their own language. And, importantly, we have a ground team that can go out to visit those we’re not able to get hold of remotely.

“We have been asking the Government to give us this responsibility for some time, so I am pleased that we now have the opportunity to take charge of tracking those people who may inadvertently be spreading the virus in the city because they don’t know that they’ve had a positive test.”

While the council’s knowledge of the city and its communities plays a key role in the process, a number of other factors are contributing to Leicester’s success in tracing local people.

“The number that appears on people’s phones when we call is a local number, and we feel this is more likely to be answered than an 0300 number that the national team need to use, but which is also favoured by unsolicited cold callers.

“Being able to visit people at their address is an important advantage and allows us to get hold of those who aren’t able to respond remotely.

“There are, of course, key bits of information we need to get from people when we contact them, but the team aren’t stuck to a rigid script, and we have a diverse range of language skills on board, as well as excellent support from the council’s community languages team.

“The team here are committed to getting the right message out to those in the city who have tested positive. We want them and their families to be safe, and we want to do what we can to try to reduce transmission.”

People prove difficult to contact for a variety of reasons, including:

Leicester City Council’s tracing team will attempt to contact individuals remotely – by phone or by email – over a period of 24-48 hours. If this is unsuccessful, members of the ground team, in full PPE, will call at their home address.

The city council’s contact tracers are all council employees who work in customer-facing roles. Currently there are 22 desk-based staff, with six more in the ground team.

The team works closely with the local PHE health protection team, who provide expert advice and follow up any issues related to workplaces or other venues where the virus might have spread.

The success of the scheme in Leicester could see other local authorities around the country adopting a similar approach.