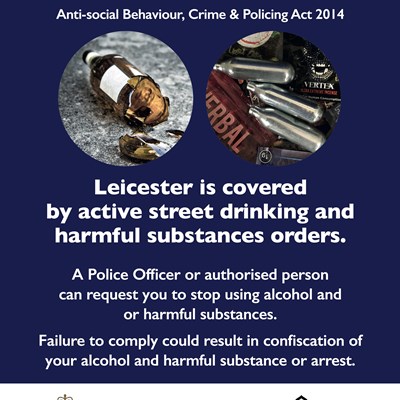 LEGISLATION to tackle problem street drinking and use of so-called ‘legal highs’ in public places across Leicester have been extended for another three years.

The city council ran a public consultation from September to November asking whether people wanted the use of a Public Spaces Protection Order to address issues such as antisocial behaviour caused by street drinking or the use of new psychoactive substances (NPSs) anywhere within Leicester.

The order was introduced in 2017 and needs to be reviewed every three years. It gives the police the powers to confiscate alcohol or substances from people who are causing a nuisance in a public place, under the Anti-Social Behaviour, Crime and Policing Act 2014.

Of those who responded to the consultation, 94 percent supported an extension to the measures. They cited the city centre, the area around the railway station, and parks, in particular Spinney Hill Park, as particular areas where they were concerned about antisocial behaviour linked to the use of NPSs and alcohol.

Commanders of the city’s four Neighbourhood Policing Teams and Leicestershire Police’s chief constable also supported the continued use of the powers.

Leicester deputy city mayor for regulatory services, Cllr Piara Singh Clair, said: “I’m very pleased that these pwers will continue to be used to tackle antisocial behaviour and other problems linked to the public use of alcohol and psychoactive drugs.

“The PSPO gives the police a much easier and more direct way of deal with such issues, and the response from the public consultation shows an overwhelming level of support from those who took part.”

A new order extending the PSPO will be made shortly.  The PSPO covers the whole city, including areas of parks that cross over into the county.

Figures show that between January 2018 and January 2020, police in central Leicester alone used PSPOs to tackle alcohol or substance-fuelled antisocial behaviour on 573 occasions – 419 of them in the area around the Clock Tower and adjacent streets.