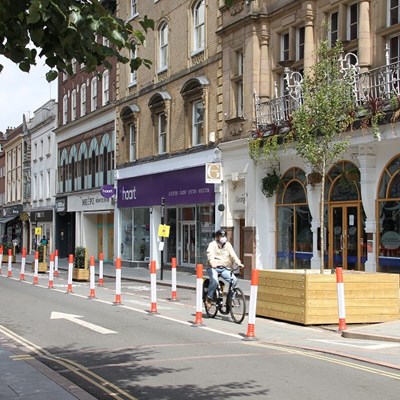 LEICESTER City Council will be getting more than £1m to help boost active travel - such as walking and cycling – and to make residential streets quieter and safer.

After a successful bid to the Department for Transport’s Emergency Active Travel Fund, the city council has been awarded £1,378,450 to spend on further improvements to city streets and neighbourhoods.

It follows an initial award of more than £405,000 from the fund. This was used on initiatives including the creation of ‘pop up’ cycle lanes in Leicester, helping key workers in particular to get around safely during the coronavirus pandemic.

The new funding will be used to help make some of these cycling and walking routes more permanent, as well as to stop traffic from rat-running through neighbourhoods. More space will be created on local streets for people who want to walk or cycle to get around.

Deputy city mayor Cllr Adam Clarke, who leads on environment and transportation, said: “This is very welcome funding that will help us continue the innovative work we began during lockdown, when we successfully delivered more than 10 miles of new cycle lanes in under 10 weeks.

“Now we’ll be able to look at our pop-up cycle lanes and keyworker corridors, consult with local people and work out where it will be most beneficial to make them permanent fixtures.

“We’ll also be making improvements to neighbourhood streets so that it is easier for people to choose more active forms of travel - and we will look to move through-traffic away from where it’s not wanted.

“Lockdown showed us that people do want to walk and cycle more, but it has to be a safe and easy choice to make. Creating quieter residential streets is key to getting people out of the car and travelling differently.”

Over the past decades, there has been a significant rise in traffic volumes on residential streets, resulting in greater noise and air pollution and increasing levels of road danger. In a partnership between Leicester City Council and the sustainable transport charity Sustrans, the funding will be used to provide experimental interventions on neighbourhood streets to reduce the impact of traffic on residential areas and create quieter, safer streets. For example, large planters or moveable barriers could be used to make roads one-way or no-through routes.

These schemes will be installed on an experimental basis, so that adjustments to improve effectiveness can be made if needed.

Improvements to the ‘keyworker corridor’ cycle lanes could include converting some of the pop-up walking and cycling routes to more permanent facilities; installing bollards to provide more protection for people on foot and cycles in the carriageway; providing segregated cycle tracks as part of carriageway maintenance schemes and creating a cycle and pedestrian crossing over Troon Way. Each of these schemes will complement the city’s existing extensive cycle network and enhance the roll-out of the recently announced bike share project, Santander Cycles Leicester.

Funding will also be available to provide additional cycle parking at some schools, workplaces and local shopping centres.

Usage of the new infrastructure will be monitored with traffic counts and route user surveys sent to people who use the Betterpoints app. Betterpoints is an app for people travelling in Leicester and Leicestershire which allows you to track your walking and cycling levels, win prizes and collect reward points which can be redeemed for high street gift vouchers or donated to your favourite charity.

Engagement and consultation with people living and working in the neighbourhoods and along the corridors where changes are proposed will start to happen over the next few weeks. Views expressed by people on the Widen My Path website, where you can nominate local streets for improvements, will also be considered.

This new phase of work will be a continuation of the objectives outlined in the city council’s Transport Recovery Plan, published in May. The plan pledged to deliver 10 miles of pop-up cycle lanes in 10 weeks – actually delivering 11 miles in nine weeks - and also led to the production of a popular Tube-style map of cycling routes available across the city.

The map, plus lots more information about cycling and walking in Leicester, is available on the Choose How You Move website at  https://www.choosehowyoumove.co.uk/