Rapid coronavirus tests to be offered in city hotspots 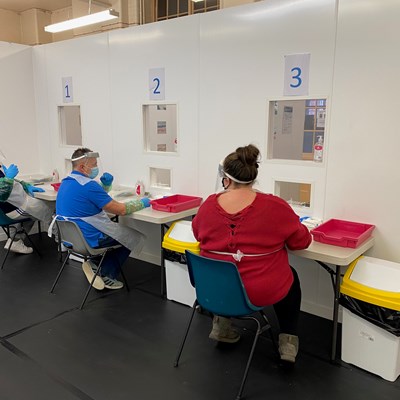 CORONAVIRUS tests that give a result within an hour will start to be offered to asymptomatic people in Leicester from today (Wednesday).

The city council plans to target areas with the highest infection rates, in a bid to find the virus and stop it spreading among families and communities.

The rapid testing programme, using the new lateral flow tests, will begin in the Fosse/Westcotes area, where a new testing unit has been set up at the Fosse Neighbourhood Centre on Mantle Road.

Starting today, council staff will be knocking on doors in the area to invite residents – even those without symptoms – to walk in for an instant test, and to offer advice on self-isolation and support that’s available to them if needed.

Today, homes in the Battenberg Road/Tudor Road area will be visited – with the teams planning to be in the Newport Street/Oban Street area tomorrow (Thursday).

Although streets in Fosse/Westcotes are being targeted initially, anyone in Leicester who has no symptoms and wants to be tested can simply walk in to the new testing unit and request the instant test.

The Fosse Neighbourhood Centre testing unit will be open every day throughout December, apart from the Christmas and New Year period (24-28 December and January 1).

Opening hours are 9am to 8pm from Monday to Friday, and from 10am until 5pm on Saturday and Sunday.

People with symptoms of coronavirus should not wait for a knock at the door but should get themselves tested as quickly as possible by calling 119.

Tests – using the more accurate PCR testing kits – can be booked at one of the city’s existing testing sites, which will be open every day over the Christmas holidays, including all Bank Holidays.

Leicester’s director of public health Professor Ivan Browne said: “The rapid tests are another tool for us in our bid to search out the virus and stop it spreading. Being able to identify people who have no symptoms but may be unknowingly passing the virus on to others – in less than an hour – will be a big help in stopping the spread and will ultimately save lives.

“Of course it’s still vital that we all continue to follow the rules, wash our hands regularly, observe social distancing and wear a face covering when required.”

The city has so far received 36,000 lateral flow tests from the Government and will receive up to 30,000 tests each week, depending on take-up. Further lateral flow testing units will be set up in other hotspot areas of the city from January onwards.

In addition, the council’s CityReach teams are still going door to door, offering the standard PCR tests – which give a result in around 48 hours – to people without symptoms in areas of the city with higher levels of infection. This will continue until the supply of PCR test kits ends, which is expected to be early in the new year.

Leicester is one of a number of cities to trial the use of rapid lateral flow tests in communities. They have already been used in the city at De Montfort University, while some care homes in the city are also using the tests to enable residents to have visitors.

The roll-out of the rapid testing programme follows last week’s announcement that Leicester has become the first local authority in the country to be given responsibility for tracing people who test positive for coronavirus but who prove to be difficult to contact.

The city council is now empowered to trace anyone in Leicester who tests positive for the virus, if they fail to respond to an automated message within eight hours.

Coronavirus cases are still higher than the national average in Leicester, with latest figures showing a 7-day rate of 256 per 100,000 (to 10 December).