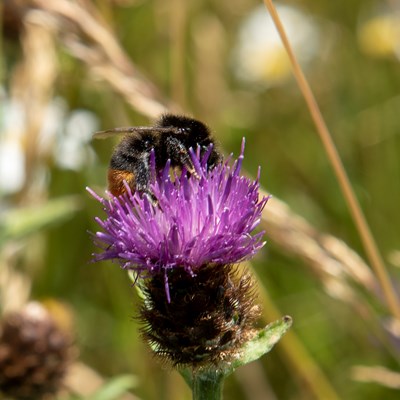 A SCHEME to help control flooding and improve wetland habitats is underway at a popular destination for cyclists and walkers on the banks of the River Soar.

Leicester City Council is carrying out a range of environmental improvements at Everards Meadows, close to Fosse Park, as part of a wider programme of work to reduce flood risk, support biodiversity and improve access along the River Soar and Grand Union Canal corridors.

The work will include the creation of new wetlands which will provide a better habitat for wildlife, while helping draw floodwater off nearby footpaths. Land will also be excavated to create a shallow drainage basin and swale to help further reduce flood risk. The spoil from the excavations will be used to create new hibernacula and little habitat mounds that will provide shelter for wildlife.

More tree planting will also help create a new woodland on the site.

The work is being carried out on private land owned by Everards of Leicestershire. As part of the development for its new home, the company has opened up and developed land to the west of the River Soar for public use and enjoyment. This includes the creation of a network of footpaths and cycle tracks and a new bridge over the River Soar which has improved access to the Great Central Way.

The city council-led flood relief scheme will help draw water away from the footpaths – which can be prone to flooding after heavy rain – and provide additional flood benefits downstream and into the city.

Deputy City Mayor Cllr Adam Clarke, who leads on environment and transportation, said: “This important project will help enhance habitats for a wide range of wildlife, increase capacity for flood alleviation and make it easier for visitors to access and enjoy this popular new destination all year round.

“Everards and its partners have done a really good job of creating a peaceful and comfortable destination for cyclists and walkers, with excellent links to the city along the Great Central Way.

“We have some fantastic riverside in the city which we want more people to get out and enjoy. Everards Meadows is one more excellent example of how that is being realised.”

Stephen Gould, Managing Director of Everards of Leicestershire said: “Everards Meadows is a wonderful space and we’ve kept much of the land as natural as possible, so the addition of these new features is welcomed.

“So many will benefit from the project – from our visitors to the local wildlife – and it enhances the important role our land plays in the local flood management plan.  We know our many visitors who enjoy the space will welcome this investment and, as an independent family business who have been around for over 170 years, it will be nurtured for many years to come.”

The £150,000 project is funded by the Local Growth Fund (LGF) - a pot of money set aside by Central Government for environmental improvements, accessibility works and projects which help the local economy, and which is being administered through the Leicester and Leicestershire Enterprise Partnership (LLEP).

Since the programme started in 2015, over 35 projects have been delivered by the Leicester City Council, the Environment Agency and the Canal and River Trust. These range from large scale projects such as Ellis Meadows and cycleway and the Loughborough Road culvert in the north of the city.”

Kevin Harris is Chair of the LLEP Board of Directors. He said: “This project forms part of a wider commitment of £7.5 million from the LLEP’s Local Growth Fund allocation for flood risk management along the River Soar.

“This project will contribute to the excellent facilities for walkers and cyclists already developed by Everards, and it will create wonderful new habitats for wildlife. This is a great example of how targeted investment can benefit not only our local economy, but our quality of life and natural environment.”

Work is being carried out by Sanctus on behalf of Leicester City Council and is expected to take around six weeks to complete.

Further enhancing the city’s resilience to flooding is just one of the actions included in the first Leicester Climate Emergency Strategy. The new strategy sets out an ambitious vision for how the city needs to change to move towards becoming carbon-neutral and adapting to the effects of global heating by 2030, or sooner.

An accompanying action plan – which will be updated on a yearly basis – brings together an initial programme of over 120 schemes that will support the strategy and help achieve the ambitious carbon savings required.