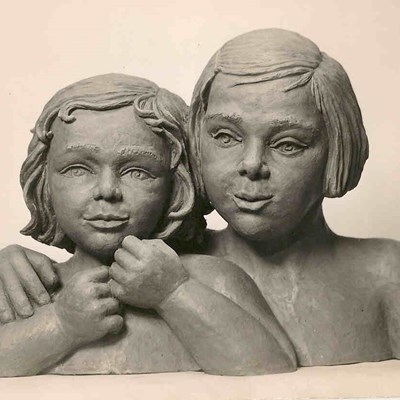 Running until April 19, the exhibition – entitled Dissent and Displacement – explores storytelling and the ways it reflects on people’s lives.

Leicester’s German Expressionist collection – the largest in the UK – proved to be an inspiration for the work, which explores themes of opposition, persecution and persistence, and led to New Walk Museum being chosen as the venue to premiere the exhibition.

Monica’s work will be depicted on a series of large panels, using a mixture of monoprint and photo lithography to create the finished works. It will be displayed alongside a selection of sculptures by Margarete Klopfleisch, whose work in wood and clay focus on the female and the bond between mother and child.

Her work ‘Mother and Children’ (1963) – sculpted from wood – was recently acquired by Leicester Museums with the help of the City of Leicester Museum Trust and will be one of 16 works on display in the exhibition.

A series of educational events will support the exhibition, including artist’s talks with Monica Petzal, and a collage-making skills workshop that the artist will lead.

Alongside the exhibition, visitors will be able to purchase a book with a foreword by Baroness Julia Neuberger, DBE. A donation from the sale of each book will go to the Refugee Council.

Dissent and Displacement: A Modern Story opens to the public on Saturday, February 8, and runs until Sunday, April 19. For more information about the exhibition, go to www.visitleicester.info

Monica Petzal is a painter, printmaker and art historian with a diverse career as an artist, academic, critic and curator. She trained at Sussex University, the Royal College of Art and Camberwell College of Art. A citizen of both the UK and Germany, Monica Petzal is intensely interested in her German-Jewish heritage.

Margarete Klopfleisch was born in Dresden, Germany, in 1911. A communist and a non-Jew, she left the city in 1933 and moved to Prague. When the German army invaded Czechoslovakia in 1939, she fled to England, where she studied at the University of Reading. Returning to the ruined post-war city of Dresden in 1960, she continued to reference significant moments of life and suffering in her sculptures. She died in Dresden in 1982.