Plough’s your big chance to name a gritting lorry 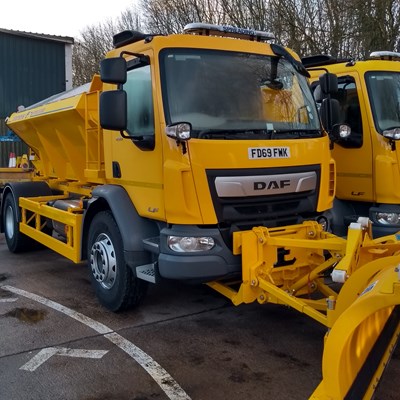 DO you know your Otis Spreading from your Snow Stormzy, or your Gritney Spears from your Basil Salty?

If so, a campaign by Leicester City Council to name its two state-of-the-art new gritting lorries could be right up your street.

The council’s highways team has taken delivery of the new gritting machines, which meet the most stringent new EU regulations on emissions – Euro 6, which is the highest standard for clean diesel engines in terms of nitrogen dioxide (NO2) emissions.

But the lean, green, gritting machines are without proper names – which is where the public can help.

Martin Fletcher, director of City Highways, said: “We’ve just taken collection of these two new gritting machines to replace two of the older ones which have reached the end of their useful lives.

“These gritters are a real change for us, as in the past we have opted for a secondhand chassis combined with a new body. However, in order to improve our environmental standards and deliver a better service, we made the decision to buy new and benefit from the latest emissions and safety technology.

“We know that these days people like gritters to have names, so we are throwing it open to people in Leicester to put forward their suggestions. It’s a bit of fun and lets people know about our hard-working teams who work throughout the winter to keep the city’s roads open.”

The new machines – which weigh 18 tonnes, can each carry five cubic metres of grit and are fitted with lightweight snow ploughs – use the latest touchscreen gritting control system which combines with a satellite navigation system for route guidance and to ensure the exact levels of gritting needed for different conditions across the road network.

A feature called a Driver Performance Assistant (DPA) contains an interactive programme to help the gritter to be driven in the most fuel-efficient way, while other electronic guidance features help safety and handling in treacherous winter conditions. Each of the gritters is costing just under £78,000.

The city council has a team of six gritting lorries and 15 specialist drivers, based at the city council’s Leycroft Road depot in Beaumont Leys, which are on standby from October through to April.

Gritting routes cover all local hospitals, fire stations and main police stations as well as many schools. In addition, there are over 430 grit bins in communities across the city, for people to grit pavements and other well-used areas.

Entries must be received by Friday, February 21, and people will then be able to choose from four shortlisted finalists. The polls will close at midday on Friday, February 28, with the two winners announced that afternoon.