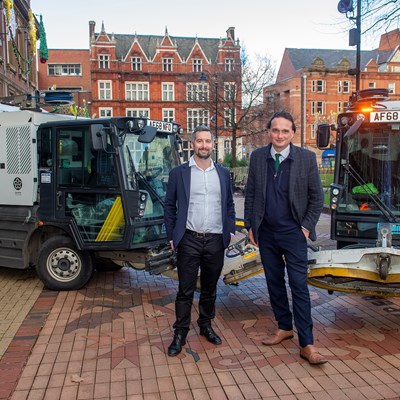 A PARTNERSHIP between the city council and BID Leicester will mean that Leicester’s streets can be washed more frequently - and more unsightly graffiti and chewing gum can be removed from the city centre.

The Business Improvement District’s support means the city council has been able to extend its cleaning programme and operate its street washing machines for an additional 18.5 hours per week.

Simon Jenner, director of BID Leicester, said: “BID Leicester is pleased to be able to build on the cleansing service provided by Leicester City Council by funding additional street washing and chewing gum removal, and paying for the extension of graffiti removal services to private premises.

“Our support, which will fund more than 900 additional hours of cleaning, will make a noticeable difference to the city centre environment, helping to ensure the city is a clean and welcoming place for businesses, residents and visitors.”

The new arrangements will be reviewed each year to determine how BID Leicester can continue to support the enhanced cleaning regime.

The city council already spends £710,000 on street cleaning services in the city centre each year, but the extra support from BID Leicester has been welcomed by deputy city mayor for environment and transportation Cllr Adam Clarke.

“Our street cleaners and our state-of-the-art machines do a great job, but this extra funding means they can be out and about more often and ensure the city centre is even cleaner and more attractive,” he said.

“We welcome the support of BID Leicester and look forward to working with them on other initiatives that will benefit both local people and the local economy.”

The two street washing machines - which cost £130,000 each - were bought in January 2019 and can be used with hot or cold water to lift stains and clean Leicester’s streets.

They patrol the city centre from 4.30am until 9pm from Monday to Friday, and from 5am-10am and 12 noon-5pm on Sundays. The city centre is too busy on Saturdays to operate the machines safely.

Neighbourhood streets are washed too, with one machine cleaning up the main gateways into the city and local shopping precincts on week-day mornings.

In addition to the street washers, the city council also uses seven sweeping machines and a team of eight street sweepers to keep the city centre looking clean and welcoming.

It also provides around 340 litter bins, which are regularly emptied throughout the day.