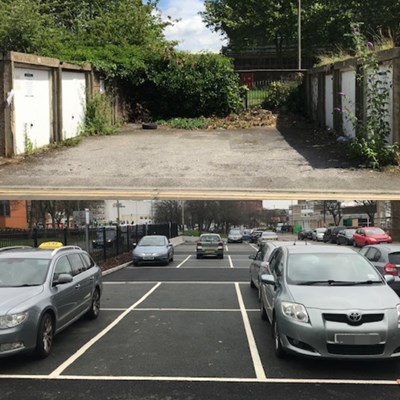 MORE than two dozen new car parking spaces have been created by Leicester City Council for residents of a city community.

Disused garages on a patch of land at Kashmir Road, St Matthews, have been demolished, the land cleared, and transformed into a new hard-surfaced car parking area for nearby residents. The work has cost about £250,000 and has resulted in 28 new parking bays.

The bays are available now to St Matthews residents' permit holders to use.

The work was carried out between City Highways and the city council’s housing team, with the goal of both improving an area of land within a housing estate, and putting it to better use for local residents.

Four blocks of garages, many of them in poor condition, had occupied the site backing onto Dysart Way.

Local tenants were consulted on the works, both beforehand and during the construction work. The scheme is part of a programme of local environmental works aimed at improving residential areas across the city.

Leicester assistant city mayor for housing, Cllr Elly Cutkelvin, said: “The garages on this land were in a poor state, and the surrounding area overgrown and unsightly.

“Clearing the old garages to replace them with new, easily-accessible car parking bays will provide much-needed parking spaces for residents in the neighbouring flats.

“It also improves the appearance of the street and opens up that area significantly.

“Our highways teams have worked closely with the housing staff and local residents to ensure the scheme addressed a real local need and will provide a practical solution to it.”

Over the last two years, Leicester City Council has invested more than £1million in creating over 150 new spaces and parking areas in 19 neighbourhoods across the city.