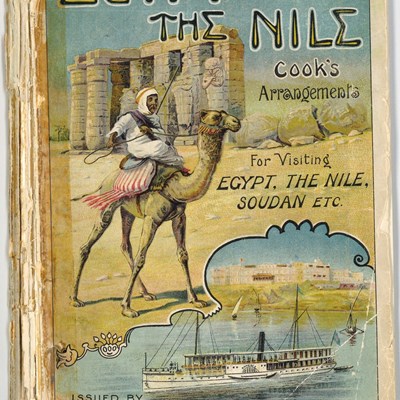 A MAJOR piece of travel history is to be preserved in the county, after the Record Office for Leicestershire, Leicester and Rutland was selected as the new permanent home of the Thomas Cook archive.

The record office, which is run by Leicestershire County Council in partnership with Leicester City Council and Rutland County Council, was awarded the honour of housing the internationally significant collection following a bidding process.

The entire Thomas Cook archive, which encompasses records from the earliest days of package travel right up to the modern day, is now being transferred to the record office in Wigston.

The huge collection is made up of thousands of individual items, including minute books and staff records, posters, travel guides and timetables. It also features 60,000 photographic images and souvenirs from Thomas Cook’s 178-year history, including glass and china, uniforms through the ages and even a model of a Nile steamer.

The archive will be the single largest collection at the record office, which has six miles of shelving representing 1,000 years of the history of Leicestershire, Leicester and Rutland.

The Thomas Cook collection will be thoroughly catalogued by record office staff, before being made available to the public.

Senior archivist at Leicestershire County Council, Robin Jenkins, said: “This is an internationally significant archive relating to a company which began in Leicester and was operated from there in its formative years. We already house an important Thomas Cook collection relating to both the man and his business.

“We see the collection as ‘coming home’ to Leicestershire and we will be delighted to look after it here and promote its use.”

Leicestershire County Council Leader, Nick Rushton, said: “I am delighted that the record office has been chosen as the permanent home for this important collection. The bid was a success because of the strong local links with Thomas Cook, as well as because the record office has an excellent reputation for innovative outreach work and the promotion of its collections.

“The fact that the Thomas Cook archive will be housed at the record office will preserve it for future generations, as well as providing a valuable resource to the people of Leicestershire, Leicester and Rutland.”

In Leicester, an exhibition inspired by Thomas Cook’s story is set to open at the city’s Newarke Houses and New Walk museums in June.

City Mayor Peter Soulsby said: “Thomas Cook is one of Leicester’s best-known sons, and his pioneering work, which essentially invented the package holiday, means his name became known worldwide. It’s very fitting that this fascinating archive of the company’s history is housed in Leicestershire, so close to where his ground-breaking work in the holiday industry took place.”

Professor in History and Strategy at the University of Bristol, Stephanie Decker, said: “It’s fantastic news that the Thomas Cook archive has been saved and will be housed in the region where the company began. The archive has local to global relevance and is highly important to anyone interested in the history of travel and leisure.”

Thomas Cook founded his travel company in Leicester and ran his first excursion from there to Loughborough in 1841. The company grew rapidly and by 1855 was running continental tours, opening a London office in 1865. Thomas Cook is credited with inventing the package tour and bringing affordable travel to ordinary people. In 1878, Cook himself retired to Leicester, where he died in 1892. The company he founded became a household name with global reach. It finally ceased trading in September 2019 and a permanent home was sought for its archive.

The bidding for the Thomas Cook archive was organised by the Business Archives Council and Crisis Management Team for business archives in liaison with the Official Receiver. It was supported by Leicestershire County, Leicester City and Rutland County councils, Leicester and De Montfort universities, the East Midlands Oral History Archive and the Media Archive for Central England.