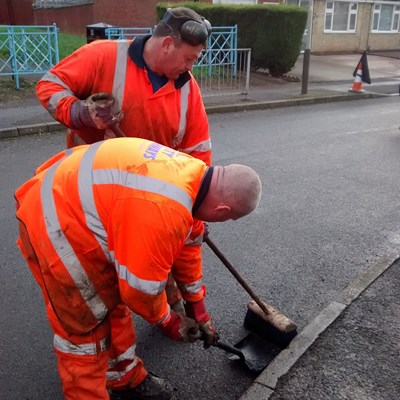 THE unsung teams of repairmen and women who fix roads across Leicester are being recognised in a national campaign.

National Pothole Day, on Wednesday, January 15, highlights the work of highways staff in councils across the UK who repair road defects, potholes and other surface damage.

Leicester’s pothole teams are based at the depot in Leycroft Road, Beaumont Leys, which also houses the city’s gritting operations, flood alleviation work and inspection work on all the city’s roads and footpaths.

The city’s road network is inspected at three to six-monthly intervals, with the busiest roads inspected the most frequently, although members of the public reporting potholes are a valuable source of local knowledge.

Any defects are measured and marked up for repair work, with priority given to the ones which are deepest or cause most disruption on the busiest routes.

City Highways’ rapid response team can fix the most severe or dangerous potholes the same day, with less serious ones remedied within between six and 20 days depending on how much of a problem they are causing to traffic.

Leicester City Council’s highways teams invested over £4.75million in road and footway maintenance in 2018/19, with a further £2.2million spent so far in 2019/20 in maintaining over 515 miles of city roads.

Repairs are a combination of urgent works and programmed maintenance, ranging from small patch repairs or surface dressing, through to complete resurfacing projects.

Director of City Highways at Leicester City Council, Martin Fletcher, said: “The volume of traffic on the city’s roads means that regular maintenance is needed to ensure they continue to meet modern demands.

“Winter weather such as frost, ice and snow also worsen any surface damage, meaning we need a programme of repairs running throughout the year, sometimes handling planned maintenance and sometimes having to respond to emergency works that come in.

“Our teams work around the clock to fix potholes as quickly as possible and keep the city’s road network running.  No one likes to see roads closed for repairs, but sometimes that is what is needed to get potholes fixed safely and quickly and getting the roads back to normal.”