Young people have their say on Leicester’s climate emergency plan 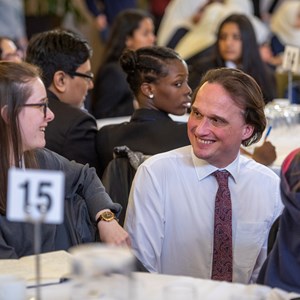 OVER 100 young people from Leicester gathered at City Hall today (27 Jan) to have their say on how the city responds to the climate emergency.

The Young People’s Climate Assembly brought together children from schools across the city to hear from expert speakers and feedback their own ideas on how Leicester needs to change to become carbon neutral.

Young delegates were invited to take part in a range of workshops and talks and come up with suggestions and proposals for what they would like to see in the city’s climate emergency action plan.

The event was organised by members of the Leicester Young People’s Council, with support from the city council’s environmental education team.

Workshop groups looked at how to tackle climate issues relating to areas such as travel, efficiency of buildings, food waste and public spaces.

Hanniya Kamran, chair of the Young People’s Council who helped organise the event, said: “The event has been really good – it’s been about looking what the solutions are.

“There are so many different areas to consider, and people have been coming up with ideas and really been thinking outside the box. You can see the spark in their eyes.

“Young people are the vehicle of change – they are changing and adapting to events, and we need that in response to climate change.”

Deputy City Mayor Cllr Adam Clarke, who leads on environment, said: “This was a superb event and it was fantastic to hear the thoughts and ideas of so many well-informed young people.

“I want to thank everyone who contributed and especially the members of the Young People’s Council who made the event happen. I hope all the young delegates will continue these important conversations with their family and friends at home.

“The climate emergency will mean making big changes to the way we live and work. It affects us all, and that is why it is so important that we allow everyone to have their say on how the city responds.”

The Young People’s Climate Assembly was part of a major 12-week programme of consultation activities being run by the city council to let people have their say on how Leicester will need to respond to the global climate crisis.

It followed the Leicester Climate Assembly held on Saturday 18 January, which was attended by over 50 delegates selected anonymously from applications to represent a cross section of the city’s population.

The consultation on Leicester’s response to the climate emergency continues until Monday 9 February. To take part, visit consultations.leicester.gov.uk