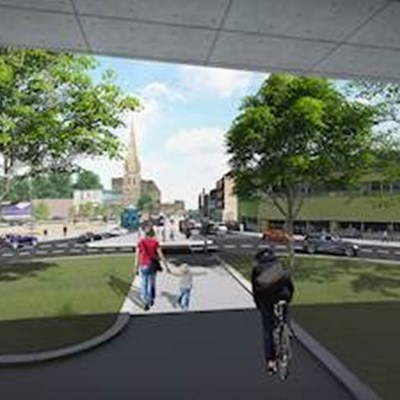 A MAJOR programme of resurfacing is due to take place on Leicester’s Belgrave Gate later this month, as work on a £2million improvement scheme progresses.

The work – which will see the stretch of road between Belgrave Circle and Burleys roundabout completely resurfaced – will take place from Saturday 18 July and will involve partial road closures for up to eleven days.

It is a vital part of the ongoing Belgrave Gate improvement scheme which will create a safer and more attractive route for pedestrians and cyclists between Haymarket Bus Station and Leicester’s Golden Mile, and significantly improve the condition of the road for motorists.

From Saturday 18 July, resurfacing work will take place on the central reservation and inbound carriageway of Belgrave Gate, between Belgrave Circle and Burleys roundabout.

This will involve a full closure of the inbound route for up to seven days. Clearly signed diversions will be in place via Abbey Park Road and St Margaret’s Way (A6).

Lane restrictions will also in place on the outbound carriageway of Belgrave Gate, between Burleys roundabout and Painter Street for two days from Saturday 18 July.

Then, from Saturday 25 July, resurfacing work is due to move to the outbound carriageway which will be closed to traffic for up to four days. Diversions will be in place via St Margaret’s Way and Abbey Park Road, or via St Matthew’s Way, the A47 and onto Dysart Way.

Local diversions will also be in place throughout the works to ensure traffic can access the St Matthew’s small business area and Charter Street industrial estate.

Work to create a new route across Burleys roundabout will begin later this summer. Some overnight road closures will be required. Full details will be publicised nearer the time.

City Mayor Peter Soulsby said: “This latest phase of the Connecting Leicester programme is creating a safer and more attractive route linking the city centre with the Golden Mile and Abbey Park.

“This important scheme will add to the growing network of new cycleways to and from the city centre that provide safe routes from nearby neighbourhoods.

“It is vital that we continue to invest in providing the infrastructure needed to encourage more people to make the switch to healthier and more sustainable ways of commuting and travelling around the city.”

A first phase of work, to create new cycle tracks and improve the route between Abbey Street and Burleys roundabout was completed last year.

The overall Belgrave Gate improvement scheme will cost £2million. This second phase will be mostly funded with Government cash from the Transforming Cities Fund.

Work is due to be complete by early autumn.