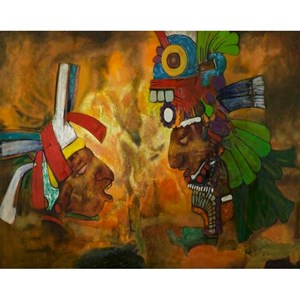 PHOTOGRAPHS, letters and artwork from the Windrush generation will be shared online this weekend as Leicester plays its part in marking Windrush Day 2020.

Windrush Day – 22 June – will commemorate 72 years since the Empire Windrush arrived in Tilbury Docks in London in 1948, carrying 1,027 migrants from the Caribbean who had been asked to come and help rebuild Britain after the Second World War.

In recognition of the contribution the African Caribbean community has made to life in Leicester, from Sunday 21 June the city council’s social media channels will showcase memories, photographs and documents of passage loaned by elders of the Windrush community, as part of a Windrush Live 2020 event produced by local arts organisation Opal 22 Arts and Edutainment.

The council’s arts and museums service will be sending out social media posts about the work of Windrush generation artists that are represented in the Leicester art collections – artists such as Frank Bowling, Aubrey Williams and Pogus Caesar.

And the council’s festivals and events team will be sharing colourful photographs from the city’s Caribbean carnivals in years gone by, with more memories of the carnival featured on the Story of Leicester website.

In addition, Leicester Libraries have put together a collection of e-books on the theme of Windrush. And starting on Sunday 21 June at 6pm, they will be sharing stories on their Facebook page, from a range of celebrated authors and storytellers including Sandra Agard, Winston Nzinga and Baroness Floella Benjamin.

From 10am until 10pm on Sunday 21 June, Opal 22 Arts and Edutainment, led by Tara Munroe, will be running a live stream on its YouTube channel of acts to suit all ages and celebrating all things Windrush. The day-long programme includes music, poetry, comedy, films, documentaries, live discussions and interviews. This is followed by an online lecture and film screening hosted by Serendipity Arts on Monday 22 June from 6-8pm, called ‘Where Are We Now?’, looking at the issues still faced by the Windrush generation today.

Deputy city mayor Cllr Piara Singh Clair, who leads on culture, said: “We have a long and proud history of working with Windrush communities in Leicester to deliver festivals, events and heritage programmes that demonstrate their remarkable and ongoing contribution to our city.

“I’m very pleased that we have been able to work with our partners at this difficult time to come up with a fantastic online programme to mark Windrush Day. Using social media will mean we can share the Windrush experience with an even broader audience.

“These projects will give the residents of Leicester and beyond the opportunity to learn about the huge influences the Windrush generation have on our community. I’m very proud to be involved.”

This painting was exhibited as part of the Aubrey Williams exhibition 'The Olmec-Maya & Now' at the Commonwealth Institute, London in 1985 and purchased from there by Leicester Museums and Galleries. It depicts the positive and negative elements of the Maya Pantheon in opposition.