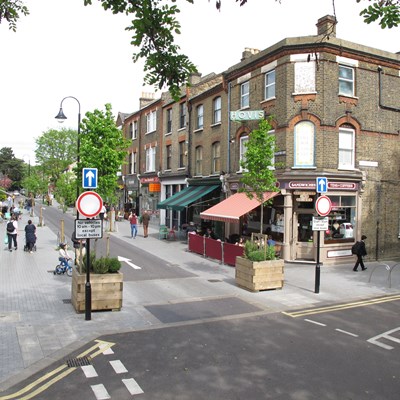 TWO new pop-up schemes to create pedestrian and cycle-friendly areas linking Leicester’s West End and De Montfort University campus are due to be put into place this week.

Changes are due to be made at Braunstone Gate and nearby Mill Lane to help enable greater social distancing among pedestrians, reduced traffic and safer cycling routes, amid a rise in cycling and walking in response to the restrictions imposed by the coronavirus lockdown.

The schemes are the latest in a wide-ranging programme of improvements to help the city’s economy, businesses and transport recover as lockdown conditions began ease across the UK for the first time since March 2020.

Traffic flow coming from the Narborough Road end will also have to give way to oncoming traffic traveling south. The work, which is being done on an experimental basis, is designed to reduce through traffic flow in the area. An advisory 20mph zone is also being introduced in the area.

On-street parking on Braunstone Gate itself will also be removed, with the extra space used to make pavements wider. Businesses will also be able to apply for street cafe licenses and outside seating areas.

Permanent Mini Holland schemes have been installed in urban areas including the London borough of Walthamstow (pictured), leading to a huge increase in cycling and walking, and a 56 percent drop in vehicle numbers.

At nearby Mill Lane, a one-way system will be put in place, meaning traffic can access Mill Lane and Grasmere Street from Western Boulevard and Jarrom Street, but not in the opposite direction.

A signed diversion route will be provided via Jarrom Street, Havelock Street, Walnut Street, Upperton Road and Western Boulevard, and a two-way cycle route introduced instead between the pedestrianised section of Mill Lane and the cycle routes across Bede Park and beyond.

Both experimental schemes will be marked out temporarily at first using traffic cones, signs and lines, with a view to making them permanent in future if they prove successful, by adding street furniture such as planters and bollards, and enabling businesses to apply for licenses for street seating.

The projects will also improve the network of cycling and walking routes connecting the city centre, Bede Park and the DMU campus.

Work at Braunstone Gate is due to take place on Wednesday, June 10, with the Mill Lane changes being installed on Thursday, June 11.

Both schemes are being carried out under the Leicester Covid-19 Transport Recovery Plan, which was published earlier this month and sets out the priorities for helping boost the city’s economy and health while making the most of opportunities to encourage more sustainable transport choices.

The recovery plan includes plans to put in place a mile per week of cycling and walking infrastructure, such as the pop-up cycle tracks already in place in Aylestone Road, Saffron Lane, London Road, Hinckley Road and Abbey Park Road, as well as pavement-widening work to help businesses in Belgrave’s Golden Mile and Queens Road.

The Government has made £363,000 available to Leicester to fund such schemes.

Leicester City Mayor Peter Soulsby said: “Our Transport Recovery Plan has set out ways in which we can help bring the city out of the slump caused by the coronavirus lockdown, and do so in a way that enables us to achieve our environmental goals of improving the city’s air quality and making our streets safer and more pleasant.

“Braunstone Gate is home to a vibrant mixture of restaurants, cafes, bars, shops and other independent small businesses, which are exactly the kinds of businesses which have been hit hard by the loss of trade from the lockdown.

“These emergency measures will encourage cycling, walking and ensure socially distancing as businesses reopen, and also longer term bring the possibility of cafes and bars including outside seating for example.”

Research carried out by Transport for London (TfL) in 2018 showed that improvements to make high streets and town centres more easily accessible by cycle or on foot had led to an increase in retail rental values, more retail space being filled and a 93 per cent increase in people walking in the streets.

The research also found that people walking, cycling and using public transport spent the most in their local shops, spending 40 per cent more each month than car drivers.

Deputy city mayor for environment and transportation, Cllr Adam Clarke, added: “We’ve seen the success of Mini Holland schemes elsewhere over the last few years, and could be an important part of our work to help kickstart the city’s economy and transport in a way that also tackles our environmental obligations.

“We need to help the city’s businesses to get back on their feet as we come out of lockdown, but also don’t want to lose the benefits to air quality and the rise in cycling and walking, that has happened over the last 10 weeks.

“Initially, it will be a temporary pop-up scheme, which we can amend if needed to address any specific local issues. But longer term, changes like this to streets and local shopping areas in communities across the city could become more commonplace as we try to address the needs to economic prosperity, public health and safety of all road users.”

Details of the Leicester Transport Recovery Plan are available here.