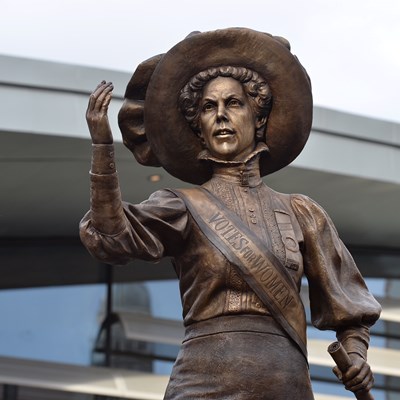 EVENTS will be taking place around the world on Sunday (8 March) to mark International Women’s Day.

The talk – which runs from 2pm-4pm – is part of an exhibition on Afghanistan that’s been organised by Leicester CND. The exhibition, Afghanistan: Hidden Voices From A Forgotten War continues until 31 March.

On Sunday, members of local churches will call for equality for women in the world and in the church by meeting at the Alice Hawkins statue to say prayers and sing songs, before walking to the Holy Cross Church. The event gets under way at 11am.

Rounding off International Women’s Day events on Sunday is the chance to find out more about the hard-fought campaign that finally led to women having the same right to vote as men.

At a spoken word show at the city’s Guildhall, the great-grandson of the Leicester suffragette Alice Hawkins will talk about her life and her struggle for equality.

Peter Barratt will bring Alice’s story to life with the help of some of her possessions – including her suffragette sash and her hunger strike medal – and with the assistance of actor Ruth Pownall, who will play the part of the Leicester suffragette in the show.

Alice Hawkins: Suffragette takes place at 2pm on Sunday 8 March. Tickets are £4.50 and are available from the Guildhall.

Curve theatre and Leicester College have teamed up to celebrate the achievements and diversity of women in Leicester and Leicestershire on Monday (9 March) and Tuesday (10 March).

International Women's Day is held on 8 March each year to celebrate women's achievements throughout history and across nations. It is also known as the United Nations Day for Women's Rights and International Peace.