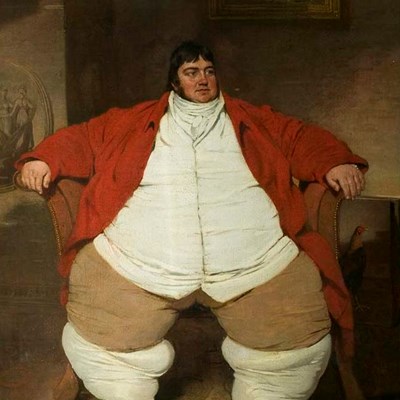 Visitors will be invited to mark Daniel Lambert Day by making a house, inspired by Daniel’s time in London in the early 1800s, and creating a moving model of the big man himself.

A trail around the museum will take in a number of Daniel Lambert artefacts from the city’s collection, including his giant chair, his waistcoat and shirt, and his prayer book.

There will also be Daniel Lambert-inspired crafts and colouring-in, and refreshments will be available.

Daniel Lambert Day runs from 11am to 3pm on Saturday. Tickets cost £3 and include a 20% discount voucher that can be used in the museum gift shop.

The talk will look at the life and character of Daniel Lambert, from his early years in Leicester to the time he spent in London, compelled by poverty to exhibit himself as ‘England’s heaviest man’.

A travelling exhibition of Daniel Lambert memorabilia will accompany the talk, featuring items such as inkwells, teapots, crested china, postcards and badges.

The items are part of the personal collection of memorabilia held by Roger Street, who is also the author of The Daniel Lambert Picture Book.

Daniel Lambert – My Big Friend takes place at 2pm on Sunday 15 March, with the talk running for around 90 minutes. Admission is free of charge, but places must be booked in advance by calling Newarke Houses Museum on 0116 225 4980.

Daniel Lambert was born in Leicester 250 years ago today, on 13 March 1770, and he died on 21 June 1809. At the time of his death, he weighed 52 stone 11 pounds (335 kg) – the heaviest authenticated person in history at that time. But he deserves to be remembered for much more than that: he was highly respected for his knowledge of breeding dogs and cockerels, and he was a benevolent keeper at the County Bridewell prison. It was only with great reluctance that he went to London to secure a regular income by exhibiting himself as England’s heaviest man.