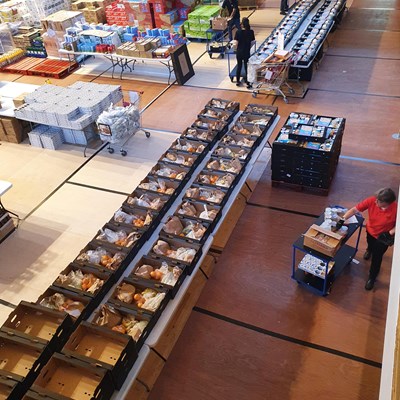 THOUSANDS of people in urgent need of assistance during the coronavirus lockdown are getting a helping hand from Leicester City Council.

Since the Government’s instruction to stay at home was made on 23 March, council staff have been ordering vast quantities of food and other essential items, which are now being parcelled up and delivered – free of charge – to elderly people and vulnerable families who have no other way of getting hold of supplies.

On average, some 900 parcels are being delivered each week – with nearly 5,000 food parcels reaching more than 2,500 households across Leicester since lockdown began.

Each food parcel contains basics like bread and milk, breakfast cereal and eggs, fresh fruit and vegetables, tinned beans and pulses, pasta or rice, and teabags and squash. Contents can be modified to suit gluten-free, diabetic, vegetarian or vegan diets.

Essentials like toilet roll, toothpaste, sanitary products and shower gel are also included every other week, as well as cleaning products and washing-up liquid.

Ambient ready meals, which don’t need refrigeration and can simply be microwaved, are added to the parcels too.

Once packed, the food parcels are delivered to addresses across the city by drivers from the city council’s own passenger transport team – staff who would normally be driving children to school.

In total, around 30 city council staff have been redeployed from their usual duties to run the emergency food service, including Ketan Galliara.

Senior business analyst Ketan has swapped his day job to coordinate the emergency scheme from the council’s food hub.

“We’ve used a network of suppliers to get the produce we want in the quantities we need, but I’m pleased to say that we’ve built up a good stock of food that we’ll be sending out to people in need over the coming days and weeks,” he said.

“The quantities involved blow your mind, when you’re only used to buying food for yourself and your family, but every week we’re supplying 2 tonnes of potatoes, half a tonne of rice, 4,000 bananas, 2,400 tins of soup and 400kg of chopped tomatoes, not forgetting the 800 cucumbers, 1,600 litres of milk and 900 loaves of bread.

“Anyone in urgent need who contacts the council on its crisis support email address will be offered a food parcel, if they have no other means of getting supplies, and we’re here, making emergency deliveries, from Monday to Friday.”

The city council’s emergency food provision is supporting the arrangements that the government has put in place to make sure that the city’s most vulnerable individuals – who have been told to shield themselves until at least the end of June – receive a weekly delivery of food.

City Mayor Peter Soulsby said: “What we didn’t want to happen was for elderly or vulnerable people to fall through the net because they weren’t on the government’s list of those who should be medically shielding.

“By providing elderly people or vulnerable families with a one-off parcel of food and essential items to help them through a difficult patch, or by delivering food to them every single week, we hope to support them during the coronavirus lockdown and make life a little bit easier for them.

“We are allocating whatever funds are necessary to support our food hub – which is just one strand of our emergency food provision that will be giving a helping hand to those most in need during the coming weeks and months.”

The government allocated £3.7m of hardship funding to the city council, which is being used to give additional council tax support to low income households, assist those facing financial hardship – including help with fuel costs – and support the emergency food provision during the coronavirus crisis.

The city council’s dedicated crisis support email address - C19support@leicester.gov.uk - can be used by anyone who’s worried about having enough food, suffering financial hardship or even if they’re feeling lonely and isolated.

Anyone worried about a vulnerable or elderly neighbour can also use the email address to get help for them.