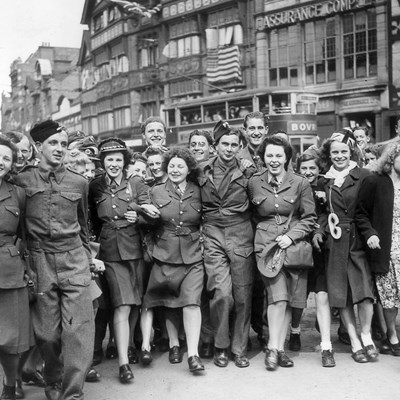 PEOPLE in Leicester are being encouraged to mark the 75th anniversary of VE Day by celebrating at home.

With public events of commemoration and remembrance now cancelled due to the coronavirus outbreak, the city council is signposting people to online resources that will help everyone feel part of the national tribute to the Second World War generation – and help them make the most of the special bank holiday on Friday (8 May).

A VE Day 75 page has been created on the council’s website that’s full of ideas for marking the anniversary – from baking war-time eggless cakes and making bunting, to learning the Lindy Hop and listening to music from the 1940s.

There are also links to useful educational resources – and to the University of Leicester’s oral history collection, recorded in the 1980s and featuring personal memories of VE Day in Leicester.

A timetable of events for 8 May is also included, starting with the two-minute silence at 11am, an online service from Leicester Cathedral at midday, the national toast at 3pm, and the Queen’s speech at 9pm – which will be followed by the nation coming together to sing Vera Lynn’s war-time classic, ‘We’ll Meet Again’.

Lord Mayor of Leicester, Cllr Annette Byrne, will pre-record her reading for the cathedral’s VE Day 75 service, which will be available via the cathedral’s website and its YouTube channel.

“Sadly the many public events that had been planned to commemorate the 75th anniversary of VE Day have had to be cancelled,” she said.

“But there are still lots of ways for people to reflect on the sacrifices that were made to defend our freedom – and to pay tribute to the men and women who served in the Second World War.

“This important anniversary is taking place in extraordinary times, but in spite of our current limitations, local people will be marking the date in their own way and in their own homes – with a shared sense of community spirit that will help bring the whole country together during these difficult days.”

The council has also been asking people to send in their family memories of VE Day in Leicester – and those local stories and photographs have been used to create a special VE Day 75 page on the Story of Leicester website.

Contributions include a certificate signed by King George VI that was presented to schoolchildren after the war, pictures of street parties on Saffron Lane and Stonesby Avenue, and a photograph of a VE Day three-legged race next to the railway embankment near Roseneath Road/Barkby Lane.

The commemorative VE Day 75 page can be found at storyofleicester.info/VEDay75

A summary of national – and local – events on Friday 8 May is set out below: