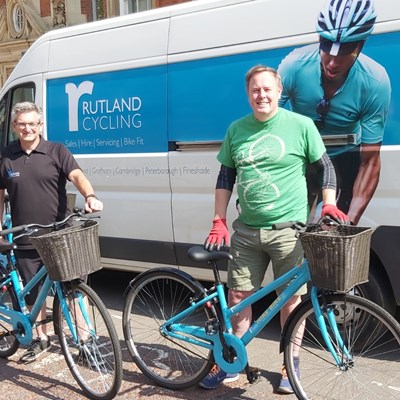 LEICESTER Bike Aid has benefitted from a generous donation of 50 bicycles from local business Rutland Cycling.

The bikes, which were delivered to Leicester Bike Aid at the weekend, will be put to immediate use helping key workers who need them to commute to work.

The Leicester Bike Aid scheme has been set up by Leicester City Council and has so far helped more than 400 key workers, either by loaning them a free bike, or fixing their own bikes for free to bring them back into use.

The city council has put resources and its own bikes into the scheme, as well as setting up temporary cycle tracks close to Leicester Royal Infirmary to create a ‘key workers’ corridor’ for cyclists to use.

Demand for the scheme has been incredibly high, meaning lots of donations of bikes are needed from generous local bike shops, businesses and organisations. Other donors include Leicestershire police, Leicestershire County Council, Sustrans and the Leicester Cycle Campaign.

Rutland Cycling opened its flagship local store at Everards Meadows, close to Fosse Park, last year. The store, which reopens this month, offers bike hire, sales and servicing as well as a range of clothing, accessories and equipment.

As part of the development of Everards Meadows, new off-road cycle tracks have been created, linking the store to the Great Central Way for a traffic-free journey to the city centre.

The family-owned business also has stores at Rutland Water and further afield in locations including Peterborough, Cambridge, Nottingham and Milton Keynes.

David Middlemiss, Director of Rutland Cycling, said: “As part of the wider cycling community we’re pleased to be able to do all we can to help Leicester Bike Aid. Rutland Cycling’s purpose is to inspire more people to own and ride a bike and the work of everyone involved in this project is certainly inspirational. Alongside all the other partners in the Leicester Cycle Campaign we are keen to introduce as many people as possible to the personal and social benefits of cycling, such that this time of great challenge can also be one of positive transformation”.

Cllr Adam Clarke, deputy city mayor responsible for environment and transportation, said: “We’ve been blown away by the response to Leicester Bike Aid – both from the public wanting to use the scheme, and the fantastic community of local bike businesses, organisations and partners who have immediately stepped up to help.

“Rutland Cycling’s generous donation will mean more of Leicester’s key workers will be able to get to work and help to keep us all safe. It’s also a fantastic endorsement of Leicester as a cycling city, where active travel is becoming more and more popular as people recognise the health and environmental benefits it brings.”

To find out more about Leicester Bike Aid, visit www.choosehowyoumove.co.uk/bike-aid/

If you can help Leicester Bike Aid by donating a bike, please get in touch by emailing cycle-city@leicester.gov.uk. The team can arrange collection if needed, and can get bikes back into working order if they need minor repairs. All donations are gratefully received.