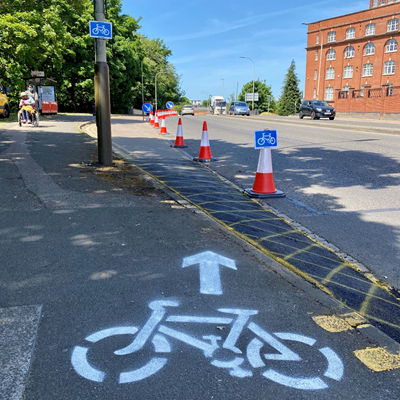 NEW pop-up cycling and walking routes are being installed at Belgrave Road to help businesses reopening in the area.

Many businesses throughout the city are expected to gradually reopen over the coming weeks with the easing of lockdown conditions which have been in place since March 23.

In order to help businesses and shoppers alike throughout the city, Leicester City Council has pledged to bring in a mile per week of safer walking and cycling routes, as well as changes to enable social distancing and encourage shoppers back into the city’s retail areas.

Pavements will be widened along both sides of a half-mile stretch of Belgrave Road, by using part of the nearside lane in each direction, between its junction with Abbey Park Street and its junction with Loughborough Road.

A new pop-up cycle track is also being installed from Belgrave Circle to the entrance to Abbey Park, to create a safer, wider route for commuters and visitors alike.

The work is due to be carried out this week, ahead of the likely reopening of businesses in June. All the changes being made are temporary emergency measures to keep people safe, and can be adjusted in future if required.

It is all part of measures being carried out for the post-lockdown recovery of Leicester’s transport system. Leicester City Council is developing a series of transport recovery measures to enable people to get around the city more safely and healthily, and to support local businesses and employees.

A key part of that programme will be to enable people to cycle and walk safely rather than relying on public transport.

Around 40 percent of urban journeys are under two miles, and by providing additional safe routes the city council wants to encourage as many people as possible to walk and cycle rather than use a car.

The routes will build upon the ongoing Connecting Leicester work to create a cycling and walking network connecting key areas of the city including shopping, business and tourist areas, hospitals, universities and development areas.

Leicester City Mayor Peter Soulsby said: “We are facing an unprecedented challenge to help Leicester’s economy to recover, and supporting local businesses is vital to that.

“We went to people to be confident that they can visit shops while still maintaining social distancing, and widening pavements using traffic cones, lines and signs is a very quick, effective way of achieving that along a section of the Golden Mile.

“A pop-up cycle lane is also being installed along part of Abbey Park Road, between Belgrave Circle and Abbey Park itself, following the success of similar schemes we’ve installed over the last few weeks in Aylestone Road, Saffron Lane and London Road.

“Together these schemes are creating a network of safe routes for people to use as an alternative to car use or public transport, which because of social distancing measures, can carry far fewer passengers than before.”

“By using temporary measures to extend our network of safe cycleways, many new and returning cyclists have been able to make healthier more sustainable travel choices.

“Walking is also great way of getting around the city for many, but in traditionally busier areas we need to create space for safer movements, to support local businesses and their customers.”

The next phases of the council’s transport recovery planning will continue to see more pop-up cycle lanes installed on some of the major arterial routes into the city, creating wider, safe cycling and walking corridors.

Pavements will also be widened to help support local shops when they reopen and to provide safer walking areas, including initially on Queens Road and in a number of other locations, including Braunstone Gate.