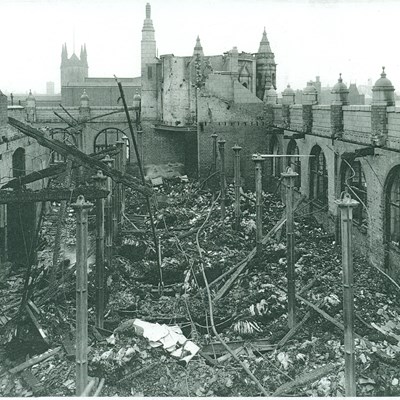 TWO new heritage information panels recounting the events of Leicester’s ‘Blitz Night’ have been installed in the city.

They commemorate the 80th anniversary of the night of 19-20 November 1940, when Leicester faced its worst raid at the hands of German bombers, and 108 people lost their lives.

The Highfields panel tells the story of three large bombs which fell on the crossroads of Sparkenhoe, Saxby and Stoughton streets.

Saxby Street Methodist Church received a direct hit, but luckily 40 people in the Wesleyan Chapel schoolrooms next door – now Sparkenhoe Primary School – received only minor injuries. Help raced to the scene, and the panel is dedicated to the 28 members of Leicester’s ARP, civil defence and police services who died during the Second World War.

The panel at the junction of Rutland Street and Humberstone Road recounts the bombing of shoe manufacturers Freeman, Hardy and Willis, whose headquarters stood on this corner. A large fire took hold after a bomb fell on the building, and the panel is dedicated to the memory of Leicester’s wartime city fire brigade and auxiliary fire service.

Deputy city mayor and heritage champion Cllr Adam Clarke said: “These panels recognise the amazing wartime efforts of Leicester people – and perhaps, with the current restrictions on our lives, we can appreciate their sacrifices more than ever.”

Author and local historian Austin J. Ruddy, who helped to produce the panels, said: “I am absolutely delighted and honoured to help perpetuate the memory of these largely unknown and unsung civil defence heroes, who so bravely and altruistically aided their fellow citizens on that terrible night - in some cases, losing their lives whilst doing so. The Leicester Blitz is often overlooked but it really is an important episode in the city's history and these heritage information panels will help ensure that this story is not forgotten.”

Mary Maynard, the daughter of Dr Garrett, who is pictured on the panel with his ARP team said: "My father had designed and built a mobile first aid post from an old charabanc. This was sent to the Highfields area where it was destroyed by a direct hit - but the team had already moved into a building where they were treating the wounded.

“Previously, when the ‘all clear’ sirens sounded, he returned home. That night, he did not return until the early hours of the morning. I remember him grey with dust and his black shoes cut with broken glass. It is a miracle that he survived. Many did not - they all should be remembered.”

Rosemary Bonser’s father, Harry Ford, appears in the back row of the ARP squad. She said: “We were so young, our memories of the Blitz are the frightening sound of the sirens. I am still scared by thunderstorms because it sounds just like the bombs falling.”

The panels will be complemented by a new exhibition at Newarke Houses Museum, called The Leicester Blitz – the German Air Raid on Leicester, 19-20 Nov 1940.

The exhibition will show how Leicester prepared for air raids and covers all the German attacks. It will also show how people acted on those nights, often in the words of those who were there. Accompanying their stories are many photographs and paintings of the damage done.

Subject to national lockdown restrictions being lifted, it is hoped the exhibition will open in early December, and run until 21 February 2021. Entry will be free, and a booking system will be in operation – please check leicestermuseums.org for updates.

Deputy city mayor for culture, leisure and sport Cllr Piara Singh Clair said: “These new panels and exhibition are a wonderful tribute to the people who led the rescue efforts during the Leicester Blitz, as well as a poignant reminder of those who lost their lives. I’m very pleased we’ve been able to mark the 80th anniversary of the Leicester Blitz night in this way.”

Leicester’s heritage information panels are part of the Story of Leicester history project. They can be seen in shopping centres, on medieval churches, near former warehouses and in front of the city’s iconic landmarks such as the Clock Tower and Corn Exchange. They can also be seen in Leicester’s historic villages, including Aylestone, Belgrave and Evington.

Find out more about the Leicester Blitz at  https://www.leicestermuseums.org/news/the-leicester-blitz-1940/