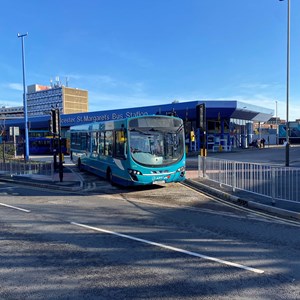 A PROJECT to improve bus journey times by creating a new slip road from St Margaret’s Bus Station to the city’s inner ring road has been completed.

The exit from St Margaret’s Bus Station has been redesigned, meaning buses can now exit the bus station directly onto Burleys Way, rather than taking a lengthier route along New Road, Gravel Street and Abbey Street to get onto the ring road.

New traffic islands on Burleys Way, new footpaths, and a crossing point and guard rails along the front of the bus station itself have also been included in the scheme. Work began in the spring, but was then delayed by the lockdown.

The new bus gate came into operation this week, and is expected to cut up to five minutes from journey times. The scheme has cost £750,000 and was funded from the Government’s National Productivity Investment Fund under its Bus Pinch Points project.

St Margaret’s Bus Station handles around 60 buses every hour, and has been at the centre of the city’s public transport system since 1985. It was last given a major refurbishment in 2007.

In August, designs were revealed for a major overhaul of the whole area surrounding the bus station as part of the St Margaret’s Gateway scheme, which will see £10.5m of Government regeneration funding invested in transforming that area of the city with a new bus station and better roads and paths.

The money was the result of a bid by the Leicester and Leicestershire Enterprise Partnership (LLEP) for a share of the £900m pot of Government’s Getting Building fund, designed to help tackle the economic downturn caused by the coronavirus disruption.

That work will be paired with the creation of a transport hub at Charles Street to improve connections between the city railway station and two bus stations.

“This, combined with the more major improvements, including the complete redevelopment of th bus station itself, will ensure better connectivity and accessibility, as well as reviving that part of the city by opening the way for larger scale regeneration.”

Simon Mathieson, area managing director for bus operator Arriva, added: “We very much welcome the opening of this link and the benefit it will bring our passengers, particularly those heading along the Groby Road.  This may not look like much but it could well deliver time savings of up to five minutes at busy times.”

It is also the terminus of the Skylink shuttle service, run by Kinchbus, between the city and East Midlands Airport.

Sue Blount, Kinchbus general manager, said: “This new road layout will provide a more direct exit from one of the city’s major transport hubs and means bus users will no longer waste time sat in traffic queuing to leaving the city.”