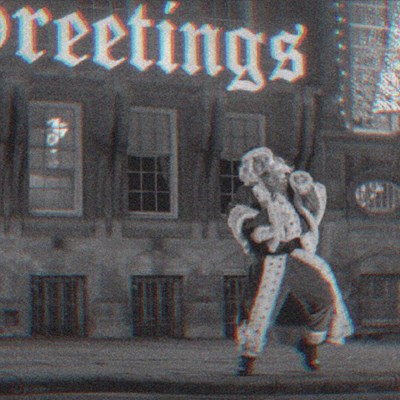 LEICESTER’S magnificent Christmas lights have been switched on, illuminating the city centre with thousands of white lights and colourful decorations.

But with coronavirus restrictions preventing the usual switch-on ceremony, people in Leicester have been left wondering who turned them on…

Video footage has now emerged, revealing that the city had a visit from a very important person last night (Thursday) – and the council believes that he was responsible for transforming the city centre with thousands of twinkling lights.

“A gentleman with a big white beard in a red coat was captured on our CCTV cameras last night,” said a city council spokesperson.

“He was spotted at the Clock Tower near the Christmas tree – shortly before it lit up with thousands of lights – and he appeared to be dancing in Town Hall Square as the lights went on.

“We are also investigating reports of an illegally parked sleigh on Belgrave Gate. We won’t, however, be taking any action because there are exemptions for some vehicles. We call it the Santa clause.”

The bearded man in the red coat appears to have lit up Leicester’s 50ft Christmas tree, Town Hall Square and around 20 city centre streets. The city council has confirmed that Leicester’s Christmas lights will shine brightly until January.

Members of the public will be able to see the video for themselves at 6.30pm today (Friday 20 November).

The short film will be posted on Leicester’s special Christmas website: www.christmasinleicester.co.uk