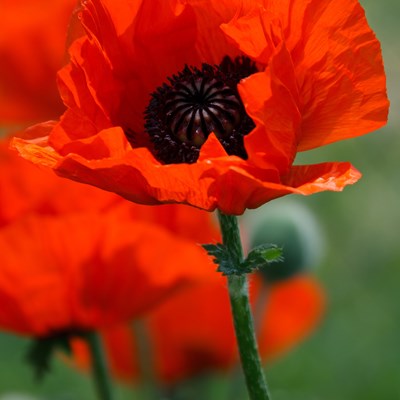 PEOPLE across Leicester are being called on to commemorate this year’s Remembrance Day in new and creative ways in the face of Covid-19 pandemic.

The traditional Remembrance Day services at Edwin Lutyens’ Arch of Remembrance in Victoria Park and at Leicester Market will not be taking place this year due to Covid-19 restrictions.

Instead, this year’s remembrance events will focus on a range of opportunities for reflection, including getting involved in online commemorations, personal reflections or activities at home.

The Lord Mayor’s office has launched its Post a Poppy campaign, encouraging people to bake cakes, draw pictures or even plant Remembrance-themed flowers, and to send in photographs of their works, with plans to then include them in a Remembrance display in the city centre.

Leicester City Council will be working alongside BBC Radio Leicester on a Remembrance Day programme to be broadcast on Sunday, November 8, at 10.30am. It will feature personal stories and information from those who have fought in different conflicts, along with a message from the Bishop of Leicester, as well as two minutes’ silence at 11am.

The Arch of Remembrance in Victoria Park will be illuminated in red.

Leicester Lord Mayor, Cllr Annette Byrne, said: “As a result of ongoing Covid-19 restrictions, it is not surprising that we will be unable to hold our usual Remembrance Day commemorations this year.

“We are extremely disappointed to be unable to provide the opportunity for the citizens of Leicester and Leicestershire to join us and show their respects for the men and women who have lost their lives in conflict, while serving their country.

“However, as with many other plans this year, we have had to adapt and to encourage other ways for people to get involved instead. For example, that could involve taking part in online commemorations, or simply reflecting on Remembrance Day with smaller activities at home.

“We are also encouraging people to get involved in our “Post a Poppy” campaign, by sending us a picture of themselves with their poppy, or even make a poppy to wear, bake a poppy cake or make a poppy display in your garden.

“The act of Remembrance is vital to keeping alive the memories of those who have died in wars over the years, and although this year’s plans have to be different, they are by no means less meaningful or poignant.

The Royal British Legion, which is behind the annual Poppy Appeal, has also shared ideas for alternative ways for people to mark Remembrance Day in 2020.

Suggestions include creating a remembrance space in the garden; using social media or online meetings to take part safely in a remembrance service or activity; or by creating an online exhibition of photos or artwork which can be used to explore local remembrance.

This year’s Poppy Appeal is online, but families can still get involved by downloading and colouring in a Remembrance Poppy to display in their window as a show of support. Visit here for more information.