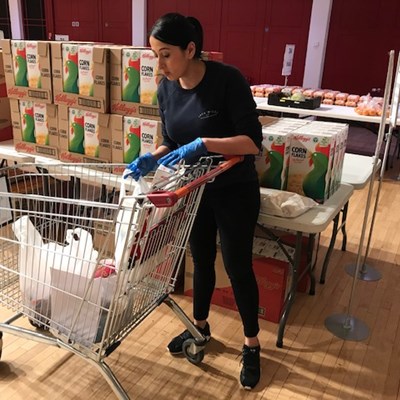 ARRANGEMENTS that have helped some of the city’s most vulnerable residents to shield themselves from the coronavirus will be paused in Leicester from today (Monday 5 October).

The Government has said that people in Leicester who are classed as clinically extremely vulnerable will no longer have to shield – which means that services that have supported vulnerable individuals and families in their homes can now be wound down.

Since the country went into lockdown in March, the city council has been running its emergency food operation from De Montfort Hall, with staff who were unable to do their usual jobs helping to set up and run the new service.

On Friday (2 October), the final deliveries of food were made to the 1,000 or so people who have been shielding – which means that De Montfort Hall will be able to revert to its usual role from next week.

City Mayor Peter Soulsby said: “I’d like to thank all the city council staff who worked so hard to make sure that no one in Leicester went without food or other essential items when they had no other way to get hold of supplies.

“Over the past six months, these food parcels have supported thousands of elderly people and vulnerable families as they shielded from the virus, helping to make life a little bit easier for them during such a difficult time.

“And although the Government has now paused the formal shielding programme, anyone who finds themselves in genuine crisis can still contact us on our dedicated crisis support email address, which will continue to operate for the foreseeable future.”

Since the start of lockdown, the city council delivered nearly 21,000 food parcels to more than 12,000 residents in 6,000 different households.

The De Montfort Hall food hub was part of the city council’s emergency food provision, which also included extra funding for its city centre foodbank, support for a network of community foodbanks across Leicester, and alternative food provision for children who missed out on free school meals when the schools were closed.

Leicester’s emergency food provision was supported by £3.7m of hardship funding from the Government, which has also been used to give additional council tax support to low income households and assist those facing financial hardship, including help with fuel costs.

The city council’s dedicated crisis support email address - C19support@leicester.gov.uk - can still be used by anyone who finds themselves in an immediate and unexpected crisis situation.

Anyone worried about a vulnerable or elderly neighbour can also use the email address to get help for them.

Although the Government has now paused the formal shielding programme in Leicester, it’s important that anyone classed as clinically extremely vulnerable continues to take all sensible precautions to protect themselves from the virus.

Information about the restrictions that are in place to help stop the spread of coronavirus in Leicester can be found at www.leicester.gov.uk/coronavirus