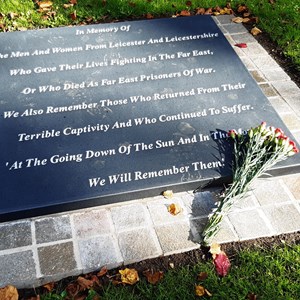 A NEW memorial stone commemorating those who were taken prisoner in the Far East during the Second World War has been installed in the city.

The stone, which is located in Peace Walk, next to the Arch of Remembrance at Leicester’s Victoria Park, has been put in place to commemorate men, women and children from Leicester and Leicestershire who were caught up in the war in the Far East, either as serving personnel in the Armed Forces or civilians.

It is the result of campaigning and fundraising by the local group of the charity Children of Far East Prisoners of War (COFEPOW).

In 2018, the group launched a campaign to erect a memorial for those who fought, died or were made prisoners of war in the Far East, as well as those who returned home and continued to suffer as a result of their treatment in captivity.

Huge numbers of men, women and children died in the fighting or as civilian prisoners between 1941 and 1945. Many of those who survived their wartime ordeal were left in poor health for the rest of their lives, suffered nightmares, and often died young due to the malnutrition, disease and ill treatment endured while prisoners of war.

The COFEPOW memorial stone was put in place in Peace Walk earlier this month, and a formal dedication service is planned at the site in spring 2021. It was paid for by fundraising carried out by the local group of COFEPOW, including a donation from the local Freemason’s Lodge based in London Road.

Leicester deputy city mayor for culture, leisure and sport, Cllr Piara Singh Clair, said: “The Second World War in the Far East touched many thousands of lives both among the armed forces and among civilians caught up in the fighting, who were killed or forced to endure the terrible hardship of being taken prisoner of war.

“We were approached by COFEPOW about their campaign for a permanent memorial back in 2018, and I am pleased that they’ve succeeded in making it a reality.

“It is very fitting that this leafy corner of Leicester, in the shadow or the Arch of Remembrance, can now be a place of reflection and commemoration by the families of those involved.”

COFEPOW area coordinator for Leicestershire, Shirley Barnes, added: "The terrible suffering of the hundreds of thousands of men, women and children caught up in the war in Far East has been ignored since the end of World War Two.

“Many people in this country have absolutely no idea that there was a war in the Far East , let alone that many people from the UK took part, were killed, or taken prisoner of war.

“Many of those who managed to somehow survive their terrible captivity were damaged, either mentally or physically, for the rest of their lives. They all suffered in some way, and their experiences impacted on their families.

“There was little of no support and almost all of them felt they had been forgotten by the country they had suffered so much for. Many returning prisoners were told not to talk about what they had been through and many never did.

“This memorial is too late for almost all those that were POWs as very, very, few are still alive to see it. It will however bring some comfort to their families that their suffering and sacrifice has at last been acknowledged.’’

Leicester City Council’s Armed Forces Champion, Cllr Vi Dempster, said: “We owe a huge debt of gratitude to all our Armed Forces, and particularly in the Far East to the role of our Commonwealth soldiers, including those from India, whose role is so often forgotten.”

An exhibition telling the story of the local Prisoners of the Far East is currently taking place at Newarke Houses Museum. It opened on the 75th anniversary of Victory in Japan (VJ) Day and runs until November 8.  For more information visit: www.visitleicester.info

Further information on the Children of Far East Prisoners of War is available here.