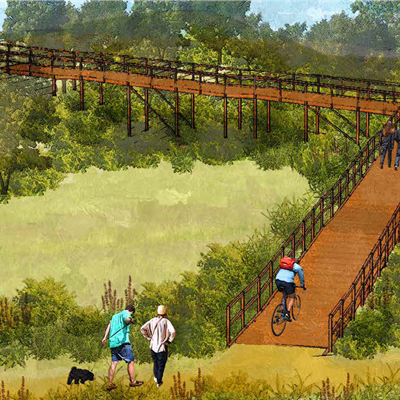 A NEW pedestrian and cycle route linking part of the Great Central Way and the Grand Union Canal is due to be built.

Work will begin this month on the Marsden Lane ramp scheme, which will create a new raised walkway connecting the towpaths route of the canal with the local cycling and walking network of which the Great Central Way is a part.

That section of the Great Central Way is much higher up than the lower-lying Marsden Lane car park, Grand Union Canal and route to Aylestone Meadows, meaning the only way to get between the two is by climbing a steep set of steps up the side of an embankment.

Instead, the Marsden Lane ramp will create a much more easily-accessible route by providing a longer, more gently sloping wood and metal ramp suitable for wheelchairs and cycles.

The project is being funded by the Local Growth Fund (LGF) - a pot of money set aside by Central Government for environmental improvements, accessibility works and projects which help the local economy, and which is being administered through the Leicester and Leicestershire Enterprise Partnership (LLEP).

The ramp scheme to improve accessibility and connectivity is taking place at the same time as wider additional flood mitigation works to protect nearby properties from flooding, including raising ground levels around the perimeter of the Marsden Lane car park, at Aylestone Meadows.

A number of other flood alleviation devices will be installed in surface water drainage pipes to ensure that the river cannot flow through them to flood the area and surrounding homes. The Environment Agency has provided £32,000 of funding towards the cost of these works.

Together, the ramp and flood alleviation works will cost just under £500,000.

Work on the Marsden Lane ramp is due to start on the week commencing Monday, October 26, with works due to continue until March 2021.

Both the ramp and flood mitigation works are being carried out by local contractor Oliveti Group, whose head office is based at Meridian Business park, and whose workshop where the three-metre wide, timber and steel ramp will be built is in nearby Enderby.

Leicester deputy city mayor for environment and transportation, Cllr Adam Clarke, said: “At first sight this may seem like a project that should be easy to get off the ground, but in truth it has taken about a quarter of a century and a lot of feasibility and design work to find an appropriate and cost effective solution.

“By installing this attractive ramp, we’ll open up access to even more people so that they can enjoy the Great Central Way, Aylestone Meadows and Aylestone Village - and get from the Aylestone area to elsewhere, such as Glen Parva, Everards Meadows, Blaby, the West End, the city centre and beyond.

“At the same time the latest stage of flood alleviation work will take place in the area, including raising ground levels, so that properties in the area are protected from potential flooding caused by the more regular heavy rainfall events that are predicted in the future.

“The money from the Local Growth Fund means we can proceed with the ramp scheme, which has benefits in terms of creating better sustainable transport links and connectivity, as well as carrying out environmental improvements which will impact on the city as a whole.”

Kevin Harris, Chair of the LLEP Board of Directors added: "Our £7.5m Local Growth Fund investment has seen the River Soar and canal area across the city transform. The improvements for both pedestrian and cycle connectivity have made the area an attractive and easy place to visit, supporting the local leisure and tourism economy.

“Tourism is one of our key industries here in Leicester and Leicestershire, and our waterways are one of our hidden gems. This project will make the area even more attractive to visitors, which in turn will boost the local economy. The ramp is being built by a local contractor, so the project is supporting local businesses and jobs from day one."

The Marston Lane Ramp is part of the Aylestone Meadows project within the River Soar and Grand Union Canal Access and Environmental Improvement Programme.

The five-year project is supported by a £7.5m allocation from the Local Growth Fund, a pot of government funding awarded to the Leicester and Leicestershire Enterprise Partnership Limited (LLEP) for projects such as this which are key to improving the local environment, the city and its economy.

Oliveti Group are long-standing members on many of the city council’s construction contracts and frameworks, and are proud to be part of the Marsden Lane ramp project.

Managing Director Gian Oliveti said: "This is a tremendous opportunity to work in collaboration with Leicester City Council on a project which will benefit the local community and environment.”

Local Enterprise Partnerships are playing a vital role in driving forward economic growth across the country, helping to build a country that works for everyone.

That’s why by 2021 Government will have invested over £12bn through the Local Growth Fund, allowing LEPs to use their local knowledge to get all areas of the country firing on all cylinders.

Analysis has shown that every £1 of Local Growth Fund invested could generate £4.81 in benefits.

If you would like some further facts about the Fund, or the wider regeneration work going on across the country, please contact MHCLG (Ministry of Housing Communities and Local Government) press office by emailing NewsDesk@communities.gsi.gov.uk in the first instance to request any additional information you might need.

The LLEP is an incorporated strategic body established to drive forward regeneration and growth of the local economy. The LLEP works with partners and government to set out key investment priorities for Leicester & Leicestershire. It also invests funding and aligns partner resources. Through its investments and influences the LLEP drives activities that ensure positive outcomes for the local economy.

To find out more, visit www.llep.org.uk