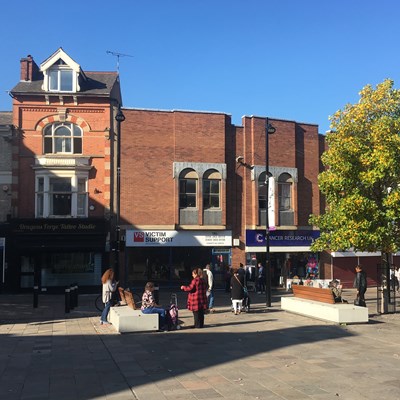 AN ATTRACTIVE new route for pedestrians could soon be linking Leicester’s historic Town Hall Square with the shops, bars and cafés in St Martin’s Square.

By demolishing the properties at 14-16 Market Place – a vacant shop and part of the unit used for storage by the market – the city council plans to create a direct link between Market Place and Cank Street, completing the pedestrian route between the two squares.

As part of the scheme, the 1970s’ façades of the properties either side of the new walkway would be improved, with new brick cladding on the ground floor and rendering on the floors above – and new windows would be created to better reflect the style of neighbouring historic buildings.

At ground floor level, the shop units would be fully refurbished, creating new rental opportunities for a café operator or for retail.

Storage space for the market would be relocated to the first floor of 18-20 Market Place, which would be extended as part of the scheme.

The proposals have been drawn up as part of the City Mayor’s Connecting Leicester programme, which is creating better links for pedestrians and cyclists throughout the city centre.

City Mayor Peter Soulsby said: “The improved route between Horsefair Street and Leicester Market that we created by demolishing an unattractive building has been very popular with shoppers – and I think this scheme would be too.

“We now have an opportunity to improve the connections between the market, St Martin’s Square and High Street that will not only encourage greater footfall around the market area, but will also help attract new private sector investment to this part of the city centre.”

The plans have been welcomed by the owners of St Martin’s Square, the Shearer Property Group.

Managing director Guy Shearer said: “When we purchased St Martin’s Square in 2016, we were very impressed with the city’s ambitious regeneration proposals for this part of Leicester. The vision, spearheaded by the City Mayor, encouraged us to invest significant time and funds into reinstating St Martin’s Square as a vibrant quarter for a variety of independent and artisan businesses.

“We have already spent in excess of £1m and intend to continue with new initiatives so that the Old Quarter of the city emerges stronger, better and more exciting from Covid-19.

“It is fantastic to see continuing council investment in this part of the city, particularly given the current challenges, and these plans to link Market Place to Cank Street will be another major milestone in completing the city’s overall vision.”

A planning application for the £2.6m scheme is due to be submitted this week.

Subject to planning permission, work on the scheme could get under way in the middle of next year, with an expected completion date of late 2022.

The buildings at 12-20 Market Place, together with a car park at the rear of the block on Cank Street, were bought by the city council for £1.8m in December 2017 as part of its regeneration plans for the market area.

Picture caption: The proposals to create a new walkway would demolish numbers 14 and 16 Market Place - the unit shown as a Cancer Research charity shop in the photo, and the unit with roller shutters obscured by the tree.