Programme of preservation work to be carried out on Magazine Gateway 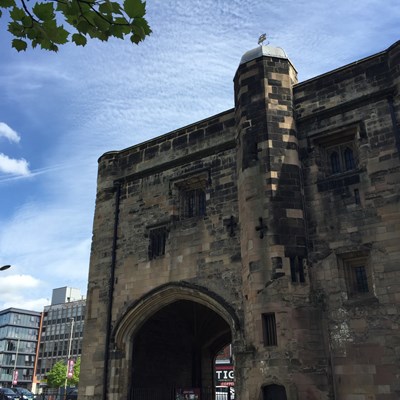 WORK is due to begin on the restoration and repair of one of Leicester’s oldest medieval buildings.

The 15th century Magazine Gateway building, between Oxford Street and the De Montfort University campus, is due to undergo a series of remedial works including repointing and repairs to stonework, drainage improvements, and removal of vegetation and accumulated bird droppings.

It will also give experts the chance to investigate close up the condition of the medieval building and plan for any further repair work that may be needed.

The Magazine is an important local landmark, which dates from around 1400 and was originally the main gateway of a much bigger walled enclosure, which enabled access to The Newarke nearby.

In its time the building has served as accommodation, a prison, a military building, gunpowder store and regimental museum, although it is now only opened to the public on special occasions organised by Leicester Museum Service.

It is a Grade 1 listed building and Scheduled Monument.

Back in November 2019, a £200,000 programme of work to repair the medieval building was announced, after work between Leicester City Council and Historic England.

Work will begin on Monday, October 26, and will continue until March 2021.

As part of work to install scaffolding around the Magazine Gateway, there will be an overnight closure of one lane of Oxford Street northbound from 9pm on Wednesday, October 28, to 6am on Thursday, October 29.

He said: “The Magazine Gateway is one of the finest medieval buildings in Leicester, but unfortunately hundreds of years of withstanding the weather, pollution and general wear and tear mean that we need to carry out this restoration.

“We know that some parts of it need stonework being repaired or replaced, while in other areas it might simply need repointing using mortar that is similar to that used originally. It also gives us the chance to get up close and investigate it further while that work is underway, to determine what other remedial work might be needed.

“It is painstaking work, but is necessary to ensure historic landmarks like this can be enjoyed by future generations.”

The remedial works are being carried out in conjunction with Historic England, who in 2019 produced a detailed condition report on the building, and De Montfort University, on whose campus the Magazine Gateway forms a boundary.